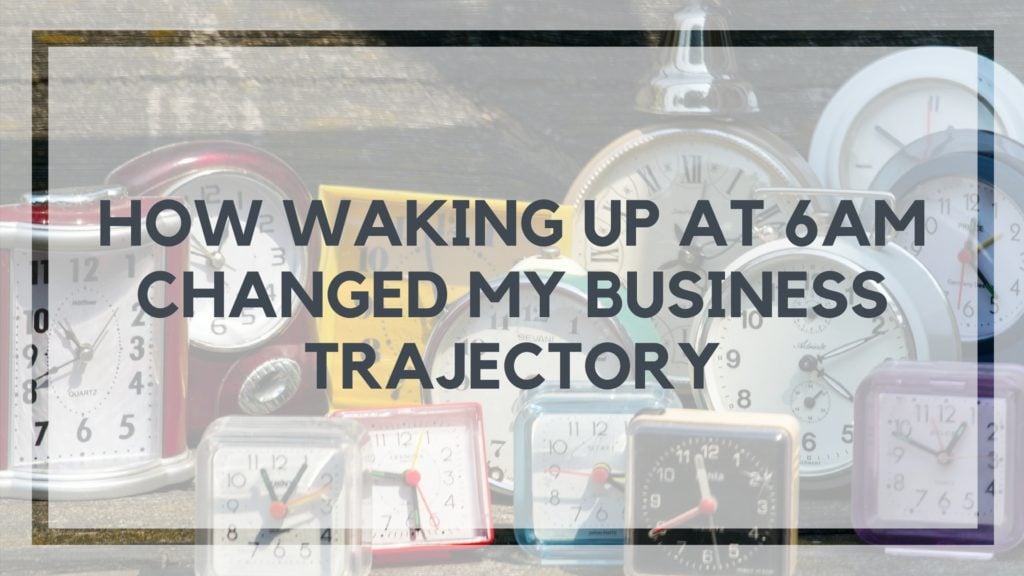 I first wrote this post way back in 2014. At the time, I struggled to get through two weeks of waking up at 6am every day.

Well, what a difference a few years make, now my 6am wake up is pretty much standard.

I want to share how I got started on the road to actually become a morning person, how getting up at 6am changed my business (f0r the better), and a few tips on how you can start waking up earlier.

How I Finally Became a Morning Person

For years, I had an item on my bucket list that I found harder than running a marathon, moving to a tropical island, or speaking in front of a large audience.

It’s was so hard, in fact, I’d never even gotten closer than 1/7 of the way towards achieving it.

My mom has said numerous times to me “why don’t you just do it? It’s easy.”

But it’s not easy.

I know I’m most productive in the mornings. I lose focus in the afternoons, and on a typical day after 5pm pretty much all work goes away.

So I know if I’m going to get stuff done, the earlier I get up the better.

Well despite my constant attempts to wake up before 6 on a regular basis – it’s just proved too difficult.

Until one fateful trip.

As expected, when I returned from Scotland, I was hit with jet lag. Every morning, I found myself wide awake at 6am, so I figured, what the hell, let’s get up and ride this out.

I was already motivated to get down to business due to the month(ish) long vacation I’d just experienced.

It’s pretty ironic, but that’s all it took. A few days of jet lag, and it got me up around 6am every weekday morning for two weeks. The result has blown me away.

In fact, they were so good, I decided to keep the schedule going.

So, What Happened? The 6am Challenge Results

The gist of the story is that during this first two week period of waking up early, all the projects I’d been wanting to push over the edge for years started to finally fall into place. All of those “business growth” projects and tasks that had been pushed aside in favor of maintenance or fun were finally getting the time they deserved – and the feeling was spectacular.

One day, in particular, stood out. I was up early, I got two blog posts written, all of my emails responded to, and I played 18 holes of golf – then was back at my desk by 9:58 for a meeting.

I decided right there and then, yea, I could get used to this.

So what changed, and why has this period of time been different than all the times I tried to wake up early? Here are four big successes.

Well first off, I changed my email habits.

You may know that I’m a huge proponent of spending time personally responding to emails – it’s one of the biggest reasons for myself, but often I get swamped in it.

So what did I change? Well, I still made it first priority, and I still try to respond to everyone (Liz helps with the Location Rebel Academy emails), but I made inbox zero much more important than it had ever been in the past.

Usually, I’d respond to maybe half of my emails in any given day. So after a week or two, I’d have a few hundred unanswered ones sitting in my inbox. These emails would taunt me, and stress me out. I was worried I’d look like an ass for not responding sooner.

After a binge on that first day of responding to all my emails and getting to inbox zero, I made a point to keep it that way.

Twice a day, once first thing in the morning, and once in the afternoon. I’d respond to everything in my inbox. Because there was no build up, it’d only actually take me about 20 minutes each time.

By not having it hanging over my head, and not taking up hours of my day, it formed the basis for all of the other positive changes.

I identified one of the biggest reasons I had trouble waking up early. Want to know what it is?

Because I didn’t have to.

There was nothing so pressing in my life that I felt like I had to get up early to accomplish it.

For quite a while I hadn’t been good at preparing a clear to do list the night before, so whenever I did wake up I usually stared at my computer or spent an hour wasting time on checking out YouTube videos (you can find the LR channel here!) before I found something productive to do.

Since I knew I had to get to inbox zero early in the day, the night before I created a list of “must dos” for the day.

What was funny was once I started doing this, and waking up early, most days the list would be complete by 9am. It didn’t take long before I started being a bit more ambitious with my goals.

Oh, and having the list on an actual piece of paper, rather than my “reminders” app made a big difference as well. Those little tweaks helped me create a system for waking up earlier and being ready to go.

For years there were various bloggers I knew who adhered to a strict “1,000 words a day” schedule. Setting up a daily writing practice was something I’ve always wanted to do and more than once I’ve declared it as a goal for the year. But never followed through.

Part of that is lack of planning.

For me, when I write, I want there to be a purpose. I’m not someone who has hundreds of draft articles that will never see the light of day. Usually, if I think a topic is worth sitting down and writing about, I’ll get it published (this probably makes me a terrible writer).

That said, all too often I sit down (and in a similar manner to when I don’t have a to do list), I’m not sure what to write.

Now, we have an editorial calendar set up for Location Rebel. I know what needs to be written and what videos need to be shot in advance. I also have a clearer idea of content I need to create for other projects because I’ve set timelines around those projects too.

You’re probably thinking, “Isn’t this own a business 101? Be organized?” – and to that I say, hey, we all have our strengths and weaknesses 🙂

A Clearer Vision for the Future

As I’ve touched on a bit in this post and others, taking some time away to travel has given me a lot of time to think about the future of the business and where I want it to go.

It’s tough to make a bunch of big, forward steps if you aren’t sure where those steps are leading.

Well, now I have a much better sense of what path I want to be on, and where I want all of this to go.

Location Rebel has always been about two things:

Now I’ve been doing that, but I haven’t been doing it as effectively as I’d like. Different people respond to different types of content and styles – so we’re broadening that, and being more consistent with the message.

My point with this one is that if you don’t have a clear vision, you have no reason to get up early to work on it.

When you can see the bigger picture of where things are heading, understand the steps you need to take to get there, and finally start tackling them, well that’s when things get really exciting.

Those two weeks were the start of something huge for me.

It kickstarted making more forward progress on the large scale business plans than I had in a long time.

I created a ton of new content, including some new courses. I’m feeling more energized during the days. And with every big to do item accomplished I’m even more motivated to knock off the next.

There’s been next to no change in my social calendar either. I still golf a few times a week and hang out with friends at night – I just try and go to bed a little bit earlier.

How to Wake Up at 6am

Have I convinced you that getting up at 6am is totally worth it?

If not, check out this video:

In it, I share my three best strategies for waking up earlier.

But here are a few more tips:

1. Decompress before bed: Put away your phone and your laptop and chill. I like to read a book or watch a movie with my wife, anything to make sure I’m not thinking about business.

2. Get in your exercise: I love to golf, so I do that a few times a week, and I also try to hit the gym on other days. When I’ve gone out for a run or worked out, I always have an easier time falling asleep at night.

3. Do something positive first thing: Most people think waking up at 6am is a chore, but plan to do something you enjoy first thing. Maybe that’s meditation or yoga or reading or making an awesome fresh cup of coffee.

4. Go gradually: If you think telling Siri to wake you up at the crack of dawn is too much, go slow. Try going a half hour or hour at a time over the course of a few weeks. Then it’s not such a shock to your system.

5. Move the snooze button: It’s really easy to roll over and hit that snooze button. So, make it really hard. Move your alarm clock or phone across the room so you have to get out of bed. 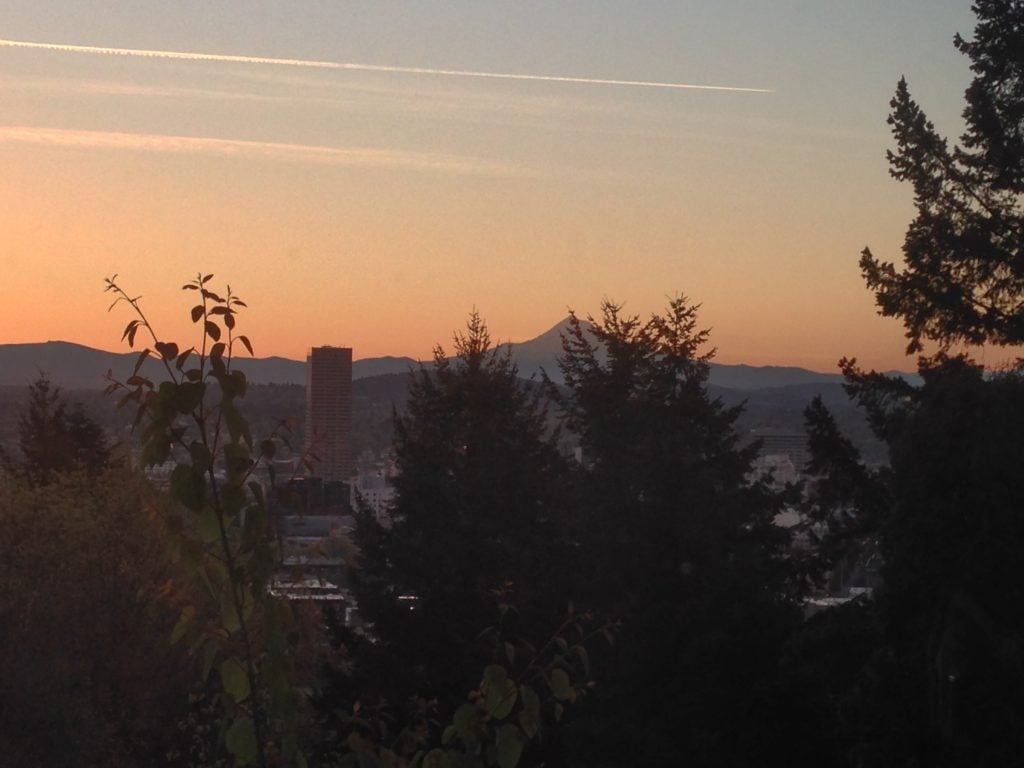 6. Take a minute to enjoy the view: I mean, you can’t really beat this sunrise, right?

So, what are you waiting for? Give it a try and see what it’s like.

If you don’t find yourself feeling super productive and getting things done, then by all means, go back to sleeping in. 🙂

Do you wake up early? How do you do it? Let us know!