How to Wake Up Earlier (3 No Brainer Tactics)

When you’re groggy, half asleep and stumbling down the stairs at 5 am, desperately trying to find the coffeemaker, often the only thing going through your mind is: “why the heck am I doing this??” 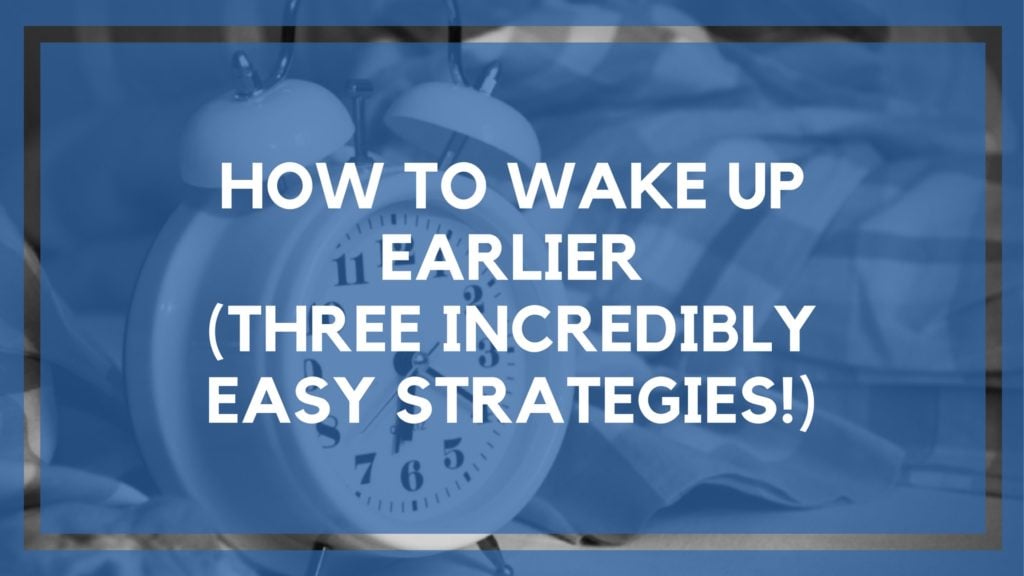 Or maybe you’re so far removed from being a morning person, that you’ve never actually experienced the joys of being an early riser.

Well, I’m going to let you in on a little secret.

Once you get past those first few excruciating minutes, and throw the covers off, turn the lights on, and get the coffee pot going – you’ll be treated to the very best hours of the day.

The hours that many of the most successful entrepreneurs in the world swear by.

Yep, in today’s post, we’re going to talk about something that has perplexed millions for years: how to wake up earlier.

And in it I’m going to share with you why I think waking up early is so important for entrepreneurs, the three things I do in order to wake up at 6am on a regular basis, as well as one more extreme, bonus tip to help you jump start your new morning routine.

How to Wake Up Earlier

The Benefits of Waking Up Earlier

I don’t need to spend too much time on this because frankly, I think we all know about the benefits of waking up earlier.

For me personally, I find that working in the early morning hours is by far my most productive time. There are zero distractions, I’m able to focus on important tasks (rather than urgent ones), and it leads to a greater sense of happiness and satisfaction as the day goes on.

When I’m up at 5, by 1 I’ve usually accomplished a full days work and then some, and I find myself saying “wow, how is it only 1?!”

But if my personal tendencies aren’t enough to persuade you, then how about these:

I could go on and on with studies like this, but we all know it, generally, there are more benefits to waking up early than to not.

So, with that in mind? How do you actually do it – even if you’re not a morning person?

Wake Up Early Tactic #1: Make Sure You Know Exactly What You’re Going to Work On

I can’t tell you how many times I’ve woken up early knowing I had a lot of stuff to do, but laid in bed and fallen back asleep.

Aside from just not wanting to leave my cocoon of blankets, on those days, I didn’t have a clear path laid out for me.

So I followed the path of least resistance: I went back to sleep.

These days the last thing I do every single day before shutting my laptop is to spend 5-10 minutes looking at my tasks and deciding which ones I’m going to focus on in the morning.

This makes it much easier to get up, get right down to work, and get over the fact it’s early because I’m excited about the business I’m building and the things I’m working on.

Want to know how I decide which tasks to do when? This post explains it all.

Wake Up Early Tactic #2: Schedule Something Fun in the Afternoon

It’s no secret that a lot of the time I like to stop working at noon.

And the way I’m able to do this, and still get a full day of work done, is by scheduling something fun in the afternoons.

For me this is often golf, meeting a friend for coffee, going out and shooting video – whatever it is that will bring you joy.

The reason this works so well is because I’ll spend all day looking forward to doing that activity – and the last thing I’d want to do is have to cancel it because I didn’t get my work done.

So on days where I know I have a lot to do, I’ll give myself a hard cut off at 12, which will force me to wake up earlier in order to get everything done.

But it also works.

I pretty much know that from 9-11pm I’m not going to do anything overly productive. Usually, it will be watching TV, drink with friends, play a video game, or read. While that stuff is all well and good, I know if I go to bed two hours earlier, and wake up two hours earlier, that time from 5-7am will be much more productive than my time was in the evening.

Once I began looking at it like that, it became much easier to both go to bed earlier, and wake up earlier.

Oh, and limiting the alcohol definitely helps in this process as well.

So there’s one thing I’ve done numerous time that has helped me get back into a routine of waking up early – and it’s worked like a charm, every time I’ve done it.

Yep, if you’re really serious about building this habit, travel east for 3-5 days. You’ll adjust to the new time zone, and when you had back, you’ll find yourself popping out of bed and wide awake earlier than ever.

You see, most people treat jet lag as a bad thing and something to avoid at all costs.

But for me? It’s often a really powerful productivity tool.

And There You Have it…

Some of these might feel like no brainer’s but they actually require a bit of work. If it were easy to get up early and be ready to attack the day, everyone would be doing it! Hopefully, these three strategies will help you wake up earlier and get a lot more done.

What are some of your best strategies to wake up early? Let me know in the comments!