About three years ago, I decided I wanted to start a daily writing practice. I immediately set a goal that I’d never actually achieve: 1,000 words a day.

You can guess how long my writing practice lasted…. 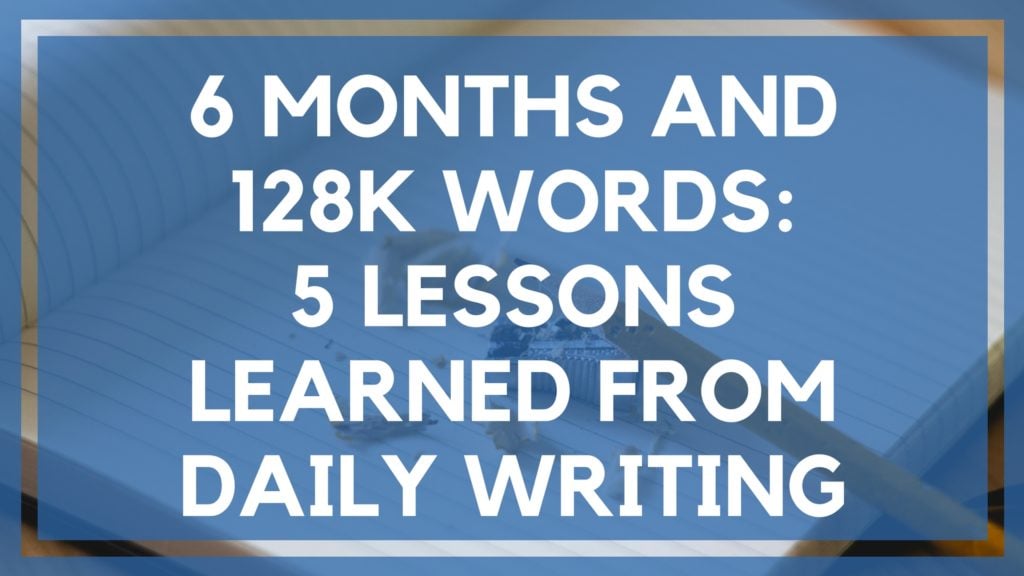 Writing 1,000 words was absolute torture. It made me feel worse about my writing than ever.

And when I couldn’t even make it a week, I felt like a failure.

About a year and a half ago, I decided to give the daily writing practice another try. This time, I was going to be smarter about it. I set my goal: 750 words a day.

Since I sort of learned a lesson from my last try, I figured this would be better. Plus I could use a tool like “Write or Die” set my word count and go.

That one lasted…maybe a week.

I started strong, as I do with most things, and then began to fade. Having to write so quickly using Write or Die was fine for my word speed but not great for my thoughts.

Once again, I was stuck with no ideas and I faded out.

Considering I make (most of) my living from writing, this lack of a practice has bothered me ever since. I didn’t know ‘why’ I wanted to do it, I felt that I should.

After all, writers write, right?

About six months ago, I gave the daily writing practice another shot.

This time, it stuck.

By setting this practice, I’ve finally been able to write every day. I’ve also learned some extremely valuable lessons along the way, and that’s what I’m going to share in this post.

I know a lot of people struggle with this. I was right there with you. And to be honest, it’s still a struggle (more on that below), but hopefully, my lessons learned might help you along the way.

It’s no surprise my first foray into getting going was set for disaster before I even started. Yes, there are plenty of people who could go from writing zero words a day to 1,000.

This girl was not one of them.

When I set that goal, I thought I was pushing myself. Instead, I picked something that was too far out of reach for me.

While I usually never have a problem with reach goals, I went from couch potato to marathon, instead of couch potato to 5k. It’s hard (like, really hard) to go from zero to awesome, most people need to make a few stops along the way.

This time, I gave up my ego and started small.

I went with 500 words. That small shift made a huge difference for me. Since I’d been freelance writing for a while, I was pretty confident that I could sit down and bang out 500 (coherent) words quickly.

That means I’m not sitting for two (!) hours trying to hit my count.

Somedays, I get into the zone and I can sit for two or more hours happily typing away. But if I’m not feeling it, I can spend 15 minutes, check it off my list, and move on.

With each quarter, I add more words.

Another reason why my first (and second) attempts at this failed was because I was putting too much pressure on myself. I thought my 1,000 words had to be Pulitzer Prize winning.

I had to learn to remove the pressure.

When I started my third try, I put zero qualifications on what I wrote. Well, almost zero. There was only one rule: it could not be client work. Anything I wrote had to be good for Liz Froment, Inc.

That means what I write can be anything that promotes me or my freelance writing business is fair game.

I allowed myself to write crap, or gibberish, or ideas, or rants, or la la la la la over and over again. It didn’t matter what I wrote, I had to write something.

As I went on, the gibberish and la la la’s decreased and the useable words increased.

While a portion of my words don’t see the light of day, I’ve been able to churn out more content in the last six months than I ever have before.

This includes writing more here at Location Rebel, a bunch of guest posts, tons of pitches, a brand new blog on books, newsletters, and opt-ins. Most of that stuff had been on the back burner for years.

Lesson #3: Everyone Should Start Journaling

I was never one to keep a journal or get my thoughts down. But as I started writing more, frankly, I need to come up with stuff to write about.

Welcome to the jungle that is my brain.

Developing a daily writing practice was something that came out of a course I took from Taylor Pearson called The Effective Entrepreneur. As part of that course, actually, at the start of it, we had to write both 25 year (!) and 90-day goals.

I found it interesting that writing was a big part of both of my goals – so I knew I had to create a system that included a daily writing practice.

My first few days of writing I spent a lot of time thinking about those 25 year and 90-day goals. I found myself journaling a ton.

And, you know what? It was great!

It allowed me to get my thoughts out there, and more often than not, I was able to work through issues, develop plans, and become a little bit more self-aware.

So while I used to think the concept of journaling was a little too “woo woo” or new age for my tastes, especially in the context of a daily writing practice, now I embrace it.

As I’ve gone along, using my daily words as a journal has decreased quite a bit, but I still find it a valuable way to get myself organized with plans. And, I always devote a few days to journaling as I come to the end of every quarter so I can review my progress and plan for the next few months.

And, I always devote a few days to journaling as I come to the end of every quarter so I can review my progress and plan for the next few months.

Here’s a lesson within a lesson: To get anything done consistently, create a system around it.

One of the biggest things I’ve learned along the way, and not with the writing practice, is that when I create a system instead of a goal, I get things done.

Step 1: I only worry about writing in 90-day chunks. Each of my 90 days has a daily writing goal with a number.

Step 2:  I have a recurring task on my daily to-do list that is daily writing. It’s staring me in the face every time I open a new tab.

Step 3: Finally, I use a writing tool that lets me easily see what I write every day.

For me, it’s BlankPage. It’s actually setup for authors who write books, but I use the ‘book’ feature as each quarter and the ‘chapter’ feature as my days.

BlankPage lets me set a daily goal and title each of my ‘chapters’ with the title and a date. This way, I know exactly what I wrote about so I can go back if I need to and pull out ideas or outlines.

I have the BlankPage bookmarked, with the icon directly in the middle of my browser, always in eye line. So when I look up, it’s a daily reminder to write.

On days when I’m struggling to get anything done, I will tackle my daily writing first. More often than not, it will give me that spark of creativity and push to move forward.

Ok, I have a confession. There are days I don’t write.

Before you scratch that record and call me a fraud, hear me out.

What I’ve found to be incredible, is after close to 180 days of a writing practice, there are still days I forget to write. You know when everyone tells you it’s 21 days and something is a habit?

Yea, not so much for me.

Some days I realize I completely forgot to write. One week in May I had friends visiting and I didn’t write at all.

Here’s the thing though, I make up for every one of those days. If you scroll through my BlankPage account, you’ll see 90 days of writing inside every quarter.

The vast majority of those days I wrote on the day it was dated. But for some, I had to sit my butt down and bang out thousands of words to make up for what I’d missed.

I know for a fact if I don’t sit down and make those days up then this writing practice will 100% go out the window. I’d guess that part is the 180 days. It’s more than likely if I had missed three or four days in a row in that first quarter, I wouldn’t have gone back to write.

Now I always do.

I think you have to be ok with missing a day here and there. It’s not the end of the world if it happens. And when it does, sit your butt down and make up for what you missed, don’t dwell on it.

Those are my lessons learned. But, here’s my advice. If you want to start a daily writing practice, do it.

Open your email, or Google Docs, or BlankPage, or TextEdit, or the Hemingway Editor, or even a good old-fashioned notebook and just write.

Write 100 words if you want to start small. Or write for 5 minutes straight.

Then tomorrow, do it again.

Trust me, you have nothing to lose and so much to gain.