I remember the moment so vividly. 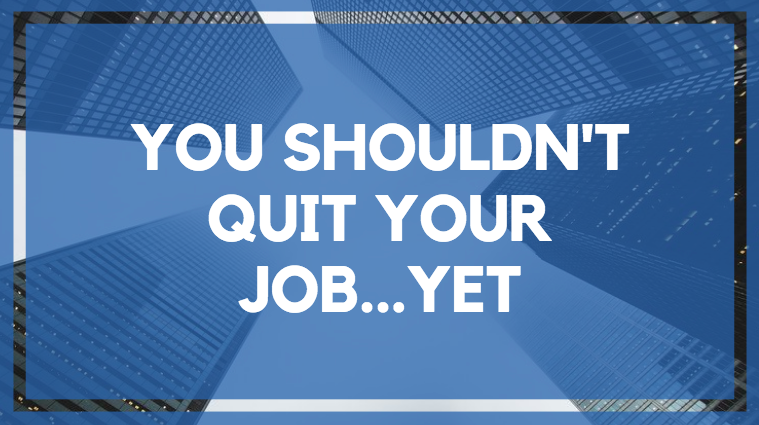 I got home from work at about 9:30 in the morning.

I was fully clean shaven, still wearing my suit that didn’t quite fit right, and I slumped down on the couch and I cried.

I don’t cry very often, but I completely remember feeling like the world was crashing down on me.

I wasn’t ready for this. It wasn’t time yet.

There’s a little gray area as to whether I quit or got fired – but the way I remember it, it was a little bit of both.

I tell a little more of the story here:

But here’s the thing, I didn’t go in that day expecting it to be my last. In fact, I’d expected to be with that company for many more months or even years.

Because I didn’t think my business was ready. It wasn’t making any money, and the pieces weren’t in place.

In order to survive and pay my bills, I now had to do something drastic.

I moved to Thailand where I could live for next to nothing, give myself the time to learn the skills I had yet to really grasp onto, and create enough of an interesting story that would allow me to keep writing on this blog and make it enjoyable enough for people to keep coming back to.

Had I stayed in Portland during that time? There’s no way I’d have the lifestyle and business I have now.

You see, there’s this big myth out there that quitting your job will make growing your new business easier.

In my unconventional case, everything worked out ok…but I also moved halfway across the world in order to put myself in a position to make it ok.

In 8 years of helping people build lifestyle businesses, I’ve learned that more often than not, the people who quit their jobs before they’re ready to have a much tougher time reaching their end goals.

It’s an easy assumption to make:

“I don’t like my job, I want to start a new online business, so I’m going to quit and free up all this time to work on it!”

The problem with it is it doesn’t take into account some of the most important feelings that you’ll face as an entrepreneur.

Those feelings that can completely derail you mentally, physically, and emotionally.

The Most Debilitating Feeling of All: Stress.

As soon as you get rid of that safety net of having a steady paycheck (no matter how big or small it is), you’ll immediately feel your stress amplify. Even if you have significant savings to live on, even if you’ve prepared for a long time to do it, you’re going to be more stressed out.

This can be completely debilitating.

Rather than focusing on all the exciting new aspects of your business and putting all your energy into how to help people, and grow the business – often people will shift to thoughts like “how am I going to pay my bills this month?” or “how can I start making money off this as quickly as possible?”

That last one, in particular, is the wrong question to be asking. This mindset will cause you to cut corners, force things that really need more time, and potentially do things solely for your own best interest – rather than your new readers, leads, or customers.

Even if you’re unhappy with your job – more often than not, it probably isn’t as bad as the stress that comes with not having it.

How Productive Are You, Really?

Once again, great in theory.

But I want you to think about something. When you’re at work, how much time are you actually, truly being productive each week.

For most of us, it’s probably not 40 hours – and for many, I’m willing to guess it’s quite a bit lower.

Sure, when you’re building something for yourself, and your back is against the wall you’re going to be more motivated to work harder.

But for so many people, there’s a limit to how long we can focus.

Nearly a decade later, I still deal with this on a daily basis.

I’ll sit down and have all of my tasks for the day laid out in front of me, thinking it’ll be a breeze to get it all done.

Couple the realities of productivity, with the stress of needing to bring in income as quickly as possible? That’s a dangerous mental place to be.

Dealing With Fear…Or Rather, Uncertainty

Finally, there’s a concept that I find fascinating.

What is it? It’s the only fear any of us actually have: Uncertainty.

You see, uncertainty is what drives most of the stress we already talked about.

Uncertainty around how we’re going to pay our bills.

Uncertainty around what our friends and families will think.

Uncertainty around what happens if you fail.

At least in your job, most of the debilitating uncertainties revolve around what happens if you decide to leave. Everything else, while it may be unfulfilling, routine, or frustrating – is at least on some level, predictable.

If You Shouldn’t Quit My Job, What Should You Do?

After seeing so many of my readers quit their jobs too early, get stressed, frustrated, and start building things the wrong way – I usually recommend people stay in their job as long as possible.

When asked “when is the right time to leave?” my general answer is:

But this only works if you’re truly honest with yourself about all the aspects of leaving.

Here are a few posts that help you weigh all the options of leaving, and help to really ensure you’re making the right decisions:

But what do you do in the meantime?

There’s a good chance you’re frustrated, unhappy, desperate for a change – and don’t know exactly how to proceed.

Here are the steps I’d recommend to anyone who finds themselves in that scenario.

If you don’t know where to start, here’s exactly what you do.

Get a domain name, a hosting account, and install WordPress.

It doesn’t matter if you have no idea what the site will be about. If you’re going to build a lifestyle business online, 90% of the time these will be your first steps.

I walk you through every aspect of it in this post:

How to Build your First Online Asset in 48 Hours

As you’re setting up this site, if you still aren’t sure what you want it to become, make it your personal blog and treat it as a training ground.

When you start blogging you’re able to learn some of the most crucial skills to success online:

Learning the fundamentals of each of these things is crucial to success down the road.

3) Find a Supportive Community of People Who Get It

More often than not, the people closest to you probably won’t fully understand what you’re going through. Whether it’s the desire to leave your job, build something for yourself, or pursue something even slightly against the grain.

That’s why finding people who do get it, is so incredibly valuable. If you know this is something you want to do, you might check out Location Rebel Academy where we have a thriving community of people going through this exact process, and we also help you learn all of the skills mentioned above to put you in a position for success.

Finally, Sacrifice and Be Consistent

There are plenty more steps you can take from there, but those will frankly depend on where you’re at with your personal goals after step 3 and are beyond the scope of this blog post.

The best advice I can give to you when you’re wanting to quit your job but need to have made a little more progress on your own thing before is this:

Sacrifice and consistency are key.

Obviously building a side hustle is difficult. It’s even more difficult when you’re working a full-time job. The trade off for less stress is sacrifice in other areas.

Turn it into a routine, and a habit. If you don’t know what to work on? Write. About anything. It doesn’t ever have to be published, but this will not only serve as a way to vent your thoughts, but it will also spur ideas.

So, no, I don’t think you should quit your job just yet. In time, absolutely. But we want this to work out for the long haul, so you can have the freedom you want forever. Not just for a few months before you’re forced back into a job you aren’t thrilled by.