The Mental Evolution of a Cubicle Dweller

This post was originally published in December of 2009. It’s been updated to fix grammar and links.

For the past few weeks I have been reading ‘s annual review posts, and it has inspired me to do a bit of a personal review myself.

While I haven’t written a book, inspired thousands of people (scratch that, 10 years after originally writing this, this is the one thing I HAVE done), or almost been kicked out of Saudi Arabia, I have been thinking a lot lately about how much has changed in 2009 and reflecting upon where I was a year ago.

If you have been reading Location 180 for awhile, you have a general sense of what I have been through, but you probably don’t realize just how far I have come to get to the point where I am today.

If you had asked me a year ago, what I would be doing in December of 2009, I surely would have told you that I would be doing pretty much the same thing I was doing in 2008.  I’d still be working 40-50 hours a week at my job, living a comfortable life, and plotting some way to use the 10 whole days of vacation I’d have in 2010 to make it some place exotic.

There was a sense of obligation in my job, that I never thought I’d be able to shake.

The mindset of “you gave me work, so I should be eternally grateful” is something that I felt would lead me to a 30 year career at the same company.  It honestly wasn’t until after I lost my job a few months ago that I was able to get rid of that feeling, and honestly the guilt that’s still inside of me tells that, even now, the feeling isn’t entirely gone.

So back to last year, one of my best friends had already been talking for months about the world trip he was going to take in January of 2010.

I had dreams of joining him, and he made some pretty good arguments for why I should (scuba diving in Utila, World Cup in South Africa, Hiking the Inca Trail, you know, typical every day stuff), but the sense of obligation to my job was so strong that I hardly considered it at that point. Getting ready for the Carnival Parade in Rio. Sorry buddy, I had to put this in here!

We’d been planning it for nearly 10 months.  I cashed in ALL of my vacation days for the year, and in February we hopped on a flight to experience Carnival in Rio de Janeiro first hand.  To say we weren’t disappointed would be an understatement.

However, more importantly than that, it was what triggered one of the rare “aha” moments you experience in life.  You know the ones where you realize that you do have options, and aren’t entrenched in whatever life you currently have.

I have extremely vivid memories of two moments in particular.

One was a Wednesday morning about 11 am walking down Copacabana beach and I just looked to Ryan and said “we should be able to do this everyday.” I want the freedom to work, when I want to, not when it is most convenient for someone else.

The second moment was near the end of our trip, and we were taking a jet boat down the Parana River after being doused by Iguazu Falls.  As we cruised the 7 miles down to our take out point, I couldn’t fathom having to go back to work a mere three days later.  It just didn’t seem right.  I think that was the moment where I realized a change needed to be made.  I had no idea how I was going to  go about it, but I knew something would need to happen.

I went back to work, longing for days when getting out for an hour to go exercise wasn’t the best part of my day.  I mean seriously, when you are counting down the hours until you can leave to go lift weights or run? Something isn’t right.  I don’t even enjoy working out that much!

Anyways, the next big shift came in April.  Ryan, on a whim, decided to move to Hawaii.

Do you know what it’s like to talk to someone 3 times a week, who’s working as a cabana boy, and routinely getting free “excursions” from his concierge roommate.  We are talking zip line rides, atv trips, diving outings, and even sunset helicopter rides, ALL FOR FREE!

If that isn’t enough to make you jealous I don’t know what is (see photo above for my version of payback).  Yet, as much as I wanted to go join him, I still wouldn’t consider the idea of leaving my job that I was so grateful for.

At this point, I’d been toying with the idea of starting a blog to help me gain some clarity about my life and goals.   had just moved to Portland, and I was shocked when he agreed to meet me for coffee.  I honestly credit a lot of this blog’s success to him.  He provided me with resources for starting the blog, as well as gave some personal insight into some of the things that worked for him (reading other blogs, and taking action being among the most useful things I got out of that first meeting). 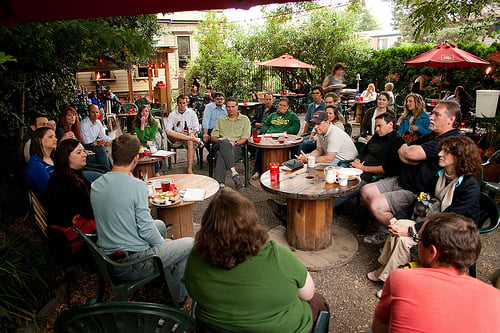 Portland Meet Up in August (Click for Photo Credit)

As I progressed through the months, and wrote post after post, I started to experience a slow evolution.  I had been in touch with so many people who were living remarkable lives that I was starting to believe maybe, quite possibly, I could actually be one of those people as well.

In September, I stumbled upon a blog post about how to propose a remote work agreement.  This is a concept that I never thought would work for my position at my job, but after thinking about it more and more, I realized that with some creative thinking, it could totally be done.

Submitting that proposal was the first real step I made towards a new lifestyle…even if it was a failure.

My failure however, was in actually believing that 1) It would work and 2) If it didn’t work, there wouldn’t be consequences.

By the time a month had passed and there was no response, I really felt like it was because they were figuring out all the details for how to make it happen.  In my mind, aside from not being able to answer the phone on a regular basis, I didn’t see a downside.

They’d save thousands of dollars annually, and I would still be able to provide nearly all of the value that I was giving while in the office.  It seemed like a no brainer to me.  But I guess I come from a new way of thinking.

In the end, they obviously didn’t accept the proposal, but it was the best thing that could have happened.  Sure, I experienced a few terrifying weeks with no income, or idea of what the future would bring, but then everything came full circle.

Like I mentioned, I started the blog with no real of idea where it would take me.

Well, my blog is taking me to Thailand.

Seriously, you want motivation for starting a blog, there you go.  In 6 months, I’ve gone from frightened conformist, to trailblazing adventure seeker (ok that might be exaggerating a little bit, but it isn’t totally far off).  The same amount of time has featured a number of slow but deliberate steps towards rewiring my brain, and adopting a new way of thinking.  Each step bringing me closer to my ideal lifestyle.

I have no idea if my next adventure ends with me having found that lifestyle that I am searching for, but I do know that I am closer than I have ever been.

Spoiler Alert: As I re-read this post that I wrote over 10 years ago, I can definitively say that this story has a happy ending. I did find the lifestyle I was searching for. And this post does a pretty good job of breaking down the journey.

Want help building a lifestyle business that will help you do the exact same thing I’ve been able to do over the past 10+ years? I’d love to help you. Grab our free 6 day course and we’ll get started TODAY.