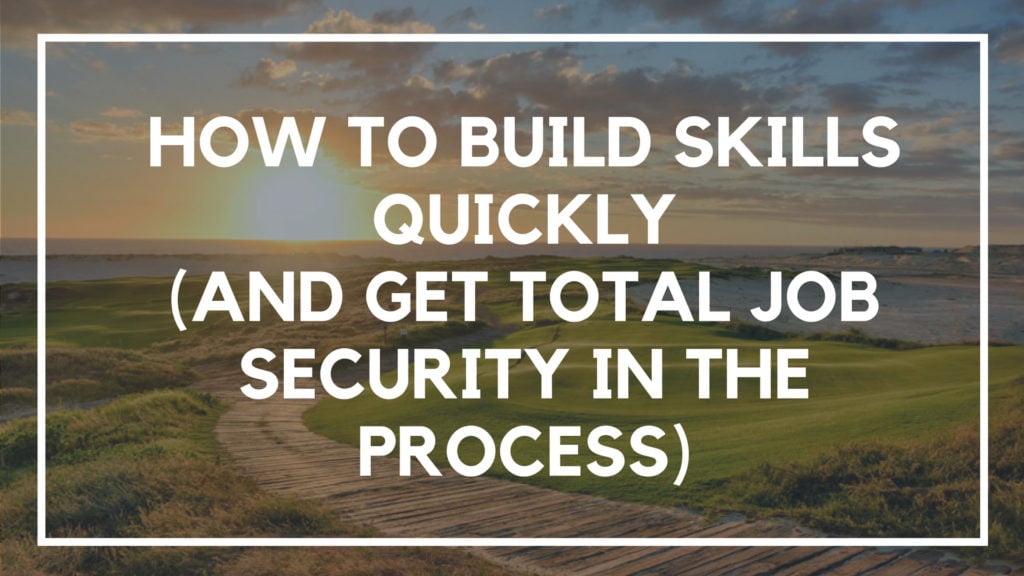 Our whole lives we’ve been trained to think that gaining knowledge, building skills, and simply learning how to do stuff takes a lot of time.

The traditional education system for most people lasts about 16 years.

Sure much of that is spent in your younger years learning the essentials of communication, math, basic history – but imagine if right now you spent 16 years learning nothing but things directly relevant to your life.

The amount you could accomplish is nothing short of mind-blowing.

However, no one thinks 16 years in advance these days.  Hell, people hardly think 16 hours ahead.

One of the most underrated and valuable concepts in life is that of rapid skill building.

I define that as learning how to do any type of skill or craft in a much shorter time frame than one has been trained to think is necessary.

Every day I talk to people who want to learn how to work from anywhere.  The question is always: “I want to travel, work from home, and generally be free, but I don’t know how to do it.”

If you’re really that miserable, and really that motivated to change there are dozens of skills that you could learn in less than a month that will make you instantly valuable to a large number of people.

You just have to commit to learning. Building skills quickly isn’t hard.

People are terrified of losing their jobs, their security, and their paycheck.  But why? We live in an age where detailed and instructive information has never been more prevalent.

There is hardly a single thing you can’t learn by getting online and following a tutorial.  Do you want to learn something more advanced? Buy a used textbook for a buck on Amazon.

The point is if I had a job, and I lost it tomorrow, there are so many things I could learn how to do that others would pay good money for.  Unemployment benefits make it so that you could have six months or more to build your skill set – with little to no financial worry.

Most just lack the motivation to take the initiative.

One of our most popular posts is called “How to Become an SEO Freelancer in 48 Hours”.  The title, while bold, isn’t a lie.  If you follow all of the steps and tutorials listed, you could easily start charging around $25/hour for basic freelance SEO work in less than a week. HDR photography is another skill that can be learned rapidly

I could rattle off another dozen skill sets you can do that with (in fact that is a large part of what Location Rebel is all about).

My point is that if you’re serious about building a business and working from wherever you want.  Get past all of the “Four Hour Workweek” bullshit.  Forget about the idea of passive income for a while.

Do some work on your own projects or for a friend, then once you’ve got a little bit of confidence (or even if you don’t) hop on any one of these 105 sites and find yourself some work.

However the concept of “rapid skill building” applies to much more than just work.

Sure there are a lot of things that take a lot of practice to get good at.  You aren’t going to spend a weekend trying to teach yourself how to play golf for instance.

But there are a ton of things that if you actually make an effort to do, and set a timeline, you’ll be amazed how quickly you can learn how to do it.

For instance, I’ve always wanted to learn how to make mashups. Take two songs, stick them together, make something new.

So I spent 45 minutes on Google, figured out what software I needed, and went to work. Literally, in less than 2 hours I’d created my first mashup that actually didn’t sound half bad.

It was even good enough to put in my marathon video.

Learning to do anything in life isn’t as hard as you think. It should be even less difficult if there is a sincere motivation behind it (such as unhappiness or financial motivations).

How Do You Build Skills Quickly?

Now that you understand the benefits of rapid skill building, and recognize it’s possible, how do you go about building skills quickly?

Looking for a starting point?

I suggest going through the process of building an online asset. The skills you’ll learn will be remarkably valuable no matter what you do, it’s easier than you think, and I’m willing to bet, you’ll have some fun in the process.