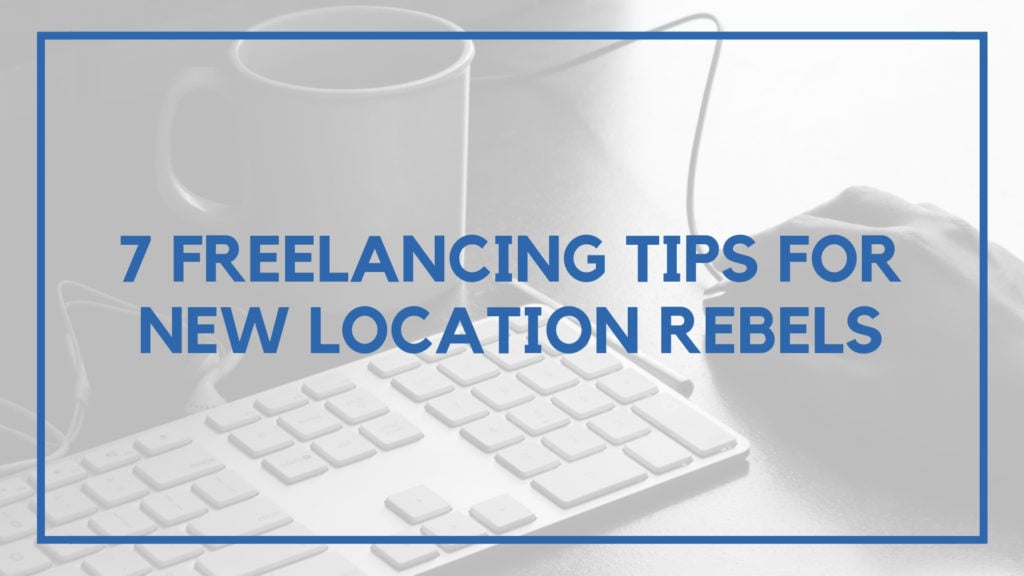 It’s always fun having new members pop up in the LR forums and make their first introductions.

“Hey, I’m Liz from Boston. I’ve been working in an office job in finance. It’s fine, the pay is ok, but I have so much more I want to do with my life. I can’t wait to get started, here are my plans…

Start a freelance website, and a blog, and maybe dabble in e-commerce, and I have a few courses I want to create.”

Then about three weeks later, it’s something like this:

“Hey everyone, wow I feel totally overwhelmed and I’ve done nothing. Help?!”

I know this first hand. When I first joined I did the same thing.

Except, the list of things I went through was about 17 items long. I was  a little bit of a hot mess. It took a while to get it together, which was probably bad for me, but good for giving general advice on how not to do things for others.

Over the years, I’ve found some freelancing tips that I think most of our members have found really helpful as they dive into the world of building a business around location independence.

So while a lot of these can be found our forum posts, I figure sharing publicly could help the masses. Even if you’re not an LRA member (yet) you can glean a few nuggets from these takeaways too.

Tip #1: Pick One Thing to Start

I ignored this lesson for years. That is one of the reasons why I push it so hard now. And I fully admit for some people this is really tough. They have tons of ideas and are super excited to jump into all of them.

To that, I say hold your horses.

Pick one thing, JUST one thing to work on. The more projects you have at the start the less likely you’re going to accomplish anything.

And if you don’t know what you want to do, pause. Think. Write ideas down. Ask your friends and family what you’re good at.

You’re not going to be making $10k a month next week. It’s ok to take a minute to come up with the outlines of a plan versus chasing every shiny thing that comes your way.

It’s decidedly boring as an approach, but it also works. The second I sat down and went all in on B2B freelance writing I became much more focused, got better clients, and saw a jump in income.

At some point, shit is going to go downhill. You’ll be coasting along and bam. A bad client, a missed assignment, a major screwup on your website. Something is going to go wrong.

In fact, this will probably happen a bunch of times to most people. You’ll make a bit of progress think you’re good and then hit that proverbial wall.

That’s why this image is so popular. Yea it’s funny, but it’s also right.

When this happens, you will get demoralized. And you’ll probably want to give up.

Here’s the thing though there is always the other side of that wall.

Without fail every time I have hit one and have seriously thought about giving up, something comes along and gets me over the wall.

And usually, that thing puts me in an even better position than I was in before. So don’t let yourself give up. Figure out what you can do during those down times to get yourself up and over the wall.

Tip #3: You Need to Pitch Yourself Constantly

I’d say this was my hardest lesson to learn and probably the biggest cause of my problems early on.

I was terrified of pitching.

You can probably dig deep into my psyche and shovel out 19 reasons why. But the big ones usually boil down to things like fear of messing up, fear of failure, imposter syndrome and so on.

It wasn’t until I had to build a bit of a thicker skin and overcame the fear of uncertainty that I was able to break through the mental barrier of pitching that I created for myself for years.

Now, I know marketing myself has to be a weekly, if not daily, task. I need to have irons in the fire and constantly work to build and nurture a network.

I think most people get stuck after that first client because they aren’t doing enough pitching. And when I say pitching, I don’t just mean sending cold emails. It’s applying to job boards, reaching out to people you know, trying for guest posts, and all that good stuff.

A little bit of self-awareness goes a long way in life. And when you’re working for yourself, you have plenty of time to look in the mirror and see how you operate under pressure or stress.

I had to take an inventory of my flaws and build a system that would help mitigate them while promoting the things I’m good at naturally. That took a bit of trial and error and a lot of self-reflection.

A big part of that is knowing your fears and your motivations too. What gets you to do something?

I’m motivated by being part of a team, for example. If I know other people are relying on me, I’m 99.99% guaranteed to do it. If I’m counting on self-motivation, that number drops considerably.

So I worked on coming up with ways that would tap into what I was good at being a team player, versus what I wasn’t.And I joined mastermind groups and participated in 30 day challenges to keep my motivation going.

I set myself up for success by understanding my best skills and going all in on those versus trying to make myself do something I’m naturally not good at.

Tip #5: Focus One Step Ahead

A common reason why someone is overwhelmed is that they are focused on step 100 when they are on step 2.

They forget that they are very new to all of this and look at those ultimate dream goals that are down the road, instantly getting demoralized because they aren’t close to achieving it.

I mean, yea if I had to spend all my time thinking about how I was going to get a byline with some huge publication or band, I’d be freaking out too.

I’m not saying don’t have goals. Goals are wonderful and awesome. What I am saying is you need to break those goals down into more realistic bites.

Let’s take starting a freelancing site. This is a big one.

You could get yourself down that it’s been two days and you don’t have this site up and running.

Or you could break it down into 10 bites over the course of a few weeks. Make each bite a small task like signing up for hosting, buying a domain name, installing WordPress, writing an about page, making a contact me page, writing a sample post and so on.

When you break things down into smaller steps its way easier to stay focused and actually get things done.

It a lot of work that takes courage and risks. You’re teaching yourself out to do things you probably never imagined six months ago.

A lot of people get themselves down about this stuff. They focus on how far they have to go.

I’m going to be really cheesy here and say, stop doing that. Instead, celebrate your small victories.

Did you buy a domain name today? Awesome!

Did you write your first ever blog post? Congrats!

Did you send out a cold pitch for the first time? Yes!

After every single one of these milestones, take a minute and give yourself a pat on the back. You are doing things and taking action.

We love to hear about these in the forum, and even have a thread dedicated to little wins.

It’s really easy to forget all the things you learn at the start and take for granted. In the internet bubble knowing WordPress is common, in the outside world, you are a special unicorn.

I think doing this helps with two things. First, it’s understanding that you’re on a journey with lots of stops along the way. And second, I think having an excess supply of good thoughts always comes in handy, especially when you hit your first wall (see freelancing tip #2).

Tip #7: It’s Ok to Work for Someone Else

Look, lots of people love working for themselves.

But that’s not the only way to do things.

Sure, we’ve had lots of people who have ventured out completely on their own and started a business or an e-commerce shop or have become full-time writers. But, we’ve also had people who used LRA to build new skills and then got full-time jobs they love in a new career.

There’s also a ton of potential to work remotely too.

With so many remote opportunities out there today, it’s easier than ever to find something that could be a great fit for your needs.

Remote jobs can sometimes be the best of both worlds. They allow you to work from anywhere but also give you some stability in the form of a consistent paycheck and health insurance. We post remote opportunities every week in the forums on everything from writing jobs to web design gigs and even apprenticeships.

So just because being 100% on your own is the path that is highlighted most often, know that it’s not the best path for everyone. There are a million options out there that work for people from finding a better office job to being a full-time freelancer.

Find the situation that works for you and go with that blaze your own path.

I’ve always thought the forums were the best part of Location Rebel, and I stand by it today. A community is huge for helping to break through struggles and self-doubt. Even if LR isn’t the community for you, find people you can talk to, encourage you, and have your back as you get into the world of freelancing.

Now get out there and do it.