2017 Predictions: What is Going to Happen to Lifestyle Businesses?

And right now you’re probably just like me, and you’re going through your annual review, and looking over what went well, what didn’t go well, making goals for 2017 blah blah blah. 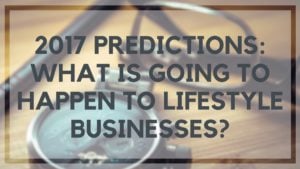 But you know what I’ve been really bad at over the years (and I bet you are too)?

Thinking about the future, and specifically, really diving deep into my predictions and what I think will happen.

You can learn a lot by looking at the past, but it’s having a solid grasp of what’s going to happen in the future that will ultimately make you successful.

So, I started thinking.

I start thinking about my business, the online landscape as a whole, the political situation we’re in – and I started asking myself “where will we be this time next year?”

What do I think is going to stop working, start working, or continue working?

What do I think is happening that will leave me and my business vulnerable? Alternatively, where do I think I’ll be able to take advantage of new opportunities?

This post is all about my predictions, which I hope will serve as a starting point for you’re own reflection.

I could be wrong about every single one of these, but if nothing else the exercise in looking forward, rather than looking back is one every current or aspiring business owner should engage in.

So let’s do it, here are my predictions for 2017 and how it relates to lifestyle businesses and the online landscape.

2017 will leave America more divided than we are now

Being honest? Right now is a scary time. I don’t talk about politics much, and I will continue to mostly refrain from that.

But regardless of which way you lean politically and which candidate you supported in the election, you can’t deny we’re facing uncertain times.

I hope Trump reinvents the American political landscape in a positive way. But with all of the hate associated with his campaign (and cabinet picks that basically seemed like they were available to the highest bidder), I think we’re in for a tough year in 2017.

Things will flare up again towards the end of January, and every move the new President makes will be under scrutiny – and this will lead to more anger, resentment and fighting.

Later in the year, I think this could change if the President is willing to change and be more open and accepting to all ideas, and not just ones involving walls and bombs.

All of this said…

If you’ve followed this site, you know that I believe uncertainty can be an asset and lead to opportunity if you frame it in the right way.

If I’m being honest, I would say that my life is better because of the recession. I don’t feel good about that, because I know it was horrible for many people and families.

But coming straight out of school into such a negative ecomonic time period, it meant there was a lot of change, and I had little to lose – so I took some risks (that really weren’t all that risky).

I think that while we won’t see the same economic drop we did back then, the newfound uncertainty will lead to opportunity for people who are willing to seize it.

As job security may be called into question for some, it will be a time to think about next moves, long term goals, and frankly what makes you personally happy in a world where so many people are not.

With so much attention placed on global politics lately, the happiest people will be the ones who do their best to tune that out and focus on their own lives. And I think for many, focusing on a new business, alternative incomes streams, and ventures where they are in control will be a big piece to this puzzle.

SEO writing and content writing will continue to be the best way to get started online.

But a longer explanation is needed for this one.

First off the term SEO writing is dying – it’s evolved so much that term doesn’t accurately describe the opportunity any more.

The vast majority of the internet is based on words.

The majority of businesses get their traffic from search engines.

So call it whatever you want, content that is optimized for search engines, will continue to be relevant.

In 2017, I think a content writing will be even more relevant and valuable to the new entrepreneur than it’s been in the past.

Sure you can’t use article spinners to pump out 10 articles an hour for $5 bucks a piece.

But because Google is getting smarter, that means there’s an increasing need for high quality content (call it SEO writing, content writing, freelance blogging, whatever you want), that people will pay a reasonable amount of money for.

Do I think this is what most people will do forever? No. But I do think it’s the best “bridge business” out there, to help you transition from what you’re doing now, to having a business that gives you the freedom and flexibility to do more of what you want in life.

If this is interesting to you, check out Location Rebel Academy. We’ve just completely revamped our blueprint structure and released our “Content Writing” blueprint, which replaces the old SEO writing blueprint.

More people will start to self-publish, and have a difficult time with it.

Over the last couple years one of the most popular online businesses to start has been to self publish books on Amazon.

It’s amazing we live in a world where you can literally make millions of dollars self publishing books.
However, as with any medium where people start seeing success, the more people that flock to it, the harder it’s going to become.

I know quite a few people who make very good livings self publishing. But lately, I’ve talked to a handful of them who found it harder to achieve the same levels of success in 2016, as they did in years prior.

“There are just so many other people now, it’s getting saturated and becoming harder to hit those best sellers list that were a cake walk before.” said one author I know.

Is there sill an opportunity? Yes, absolutely. And they will continue to be one.

But the people who are going to be successful will be:

So don’t take this as me discouraging you from self publishing, just recognize it’s getting harder and harder.

Frankly, we’re in a gold rush state, where the best way to make the big bucks is to sell the tools rather than searching for gold. I know a couple entrepreneurs who have built million dollar businesses very quickly capitalizing on this by teaching people how to self publish.

Personality will be 100% necessary if starting a new business online

I grazed past this in the last point, but this is going to be one of the most important factors in any business in 2017.

What are you doing that’s unique? What is your angle that makes you so different from the thousands of other people who are trying to do the same thing as you?

If you’re boring? No one cares.

If you’re a copycat? No one cares.

Bottom line, if you’re going to succeed you need to be useful and entertaining.

Now I’m not saying you have to be a comedian or rock star to have success online, but you need to at least try to set yourself apart.

Ask yourself that honestly, and you’ll be way ahead of the game as you move into the new year.

The tighter the niche, the better chance of success

Because so many markets have been saturated, the people who will be most successful are the ones who niche down into those markets.

Do you help people learn how to trade stocks?

Or do you help people under the age of 35 that want to travel the world, learn how to day trade penny stocks, like Cameron.

Do you help people lose weight?

Or do you help video game nerds who don’t like traditional gyms get in shape like Steve?

Or do you help people who are in jobs they don’t like, become new entrepreneurs by building small bridge businesses, that allow them to travel and spend more time with their family like me?

People will make a killing off of others being scared.

This isn’t something I’m advocating here, but it’s something to be thinking about.

Earlier we talked about the scary things going on both with the US and the world as a whole.

Cape Breton is doing a pretty good job of this.

I’ve had a couple people ask me which social media platform I’m the most bullish on.

I think it’s beautiful in it’s simplicity, and they’ve been implementing new features in a way that really works.

The biggest factors are stories, disappearing messages, and Live video.

These directly take on Snapchat and Periscope.

Do I think Snapchat is going anywhere? No, but I think it now gives me even less of a reason to start using it considering I can pretty much do the same stuff with Instagram in a much easier to use package.

I think it is also another huge blow to the Twitter owned Periscope that specializes in live video – as now, I have even less of a reason to use Periscope as well.

I think Twitter is the best tool for reaching out and getting on the radar of other influencers or people you want to know, but I think it’s going to continue to slide as there are far better ways to share and consume content.

These are just a handful of things I’ve been thinking about, and considering while planning what my year is going to look like.

Over the last few weeks, it’s become on clear on social media that 2016 was simply a bad year for a lot of people.

For 2017, focus on you. What actions can you take, and what moves can you make that will get you closer to the life you’re really looking to live?

I’m excited to see where things go, and one of my biggest goals for the new year? Tune out the global and political noise, and truly focus on what I want, and what my audience (you!) want – that’s what will be most important to my success and happiness.