Music and Travel: How Music Eased My Transition to Living Abroad

This post was originally published in January 2010 just weeks after quitting my job and moving to Thailand. Music has always been a huge part of my life and this post reflects that.

Despite not being relevant to freelance writing or building a lifestyle business, this was a foundational time in the Location Rebel journey, so I’ve left it published, in it’s mostly untouched form. You can find more posts here from my time living in Thailand.

If there is one thing that has remained constant through my transformation over the last year, it’s my love of music.  It has played such a strong role in my life that I sometimes wonder where I would be without it.

Regardless of how you are feeling, there is a song or artist out there that can make you feel better. If you need motivation, commiseration, energy, whatever it is, music will always be there to help.  Just today I found myself wearing down a little, and all I had to do was put in my headphones and everything was better.

There have also been specific songs in my life that have helped me down the path I’m on for various reasons.  They span all different genres, but there are certain songs that I listen(ed) to on a daily basis that just make me feel good, and help the cause.

Here are a few of the songs I’ve listened to the most frequently over the past few months:

Note: I was going to provide links to all of these songs, but I think you’re better off just listening to them on Spotify.

Now that I’ve been traveling for the last few weeks, it’s been interesting to see what kind of music I hear around Thailand.  Generally it’s one of two things: you hear either an islandy mix of Jack Johnson/Ben Harper-esque tunes, OR the exact same rap songs over and over again.  I swear ALL of the bars in Ao Nang all of the exact same CD on repeat.  If I have to hear “Tonight’s Gonna Be a Good Night” one more time, I might kill some one.  But I digress..

One of my biggest passions in life is playing the guitar.  I’ve been playing for as long as I can remember, and it was one of the things I’ve missed most since being here.  I even missed it so much that at 2:30 in the morning the other day I asked a local Thai kid if I could borrow his to jam on.  Well I did, and some pretty hilarious video ensued.  I thought about posting it here, but I couldn’t bring that kind of self-humiliation upon myself. 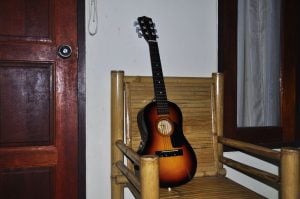 The best $30 guitar I’ve ever bought…

Ok, or at least it was the best $30 guitar I’d ever bought until this whole debacle.

However, IF (and I honestly don’t expect this to happen) this post gets 100 comments, I will post the video of me busting out in song in the middle of Ao Nang the other night.

Dan and I had such a good time that night that we even hopped on a bus to Krabi Town the next day to find ourselves a pair of guitars.  $30 still doesn’t get you much in the way of a guitar, even in Thailand, but they have definitely got the job done.

Even better, I fulfilled the first piece of goal #67 which is sit down and write a song in a foreign music shop.   Sadly however,  we were kicked out before we got a chance to take a video, but just know that it did happen!  Now we are piecing together some ideas for how to go about setting up shop on a local street corner for an afternoon.  I’m convinced we can make more than Oregon’s minimum wage of about $9 over the course of an hour.  I’ll let you know if the experiment actually goes down.

Until then what type of music do you listen to?  What motivates you?  Remember, each comment goes a long way towards me making a fool of myself 🙂

Tomorrow I’ll be headed to Koh Phi Phi for the next week or so, and I have no idea how reliable internet and wifi will be.  So if I don’t respond to your email or comment, don’t despair! I will be back in Ao Nang by the end of next week.

I also apologize for the crappy photo of the guitar on the front page.  I needed something, and surprisingly, didn’t have any better ones lying around.  I’ll make it up with better photos next time!