I generally try to stay away from writing about politics and the like.  There are a lot of people out there that can do it much better than I can, but in this case I am making an exception, as the situation in Bangkok took a turn for the worst yesterday.

Well life in Bangkok continues to be interesting, and today was no exception.  As I’ve been saying for the past week, I’ve been trying to make it out to Khao San Road to try and find a cheap guitar.  Well today was the day I finally decided to make the journey.

What I hadn’t anticipated was the fact that today was the breaking point for the Red Shirt protests that have been going on for the last month here in Thailand.

The short story is that in 2006 the red prime minister was overthrown in a bloodless military coup.  The two main political parties here, the red shirts, and yellow shirts, have since been going back and forth about who should control power in parliament.  The current government doesn’t agree with this political movement, and for a better summary of why this is check out the BBC’s Q&A about the protests.

Fast forward to last month.  Thousands of red shirt supporters have traveled from provinces all over Thailand to show their support for the protests.  At its peak there were over 250,000 people that have congregated in various places all over town in mostly peaceful rallies, and have vowed not to leave until the government holds new elections.  Well today was the the day this changed.

Around 1pm my friend Jodi and I hopped in a cab to head out to Khao San.  She was meeting a friend and I was going to search for the aforementioned guitar.  Apparently our cab driver was a bit oblivious to the whole situation that was developing and drove us directly into ground zero for the riots.

Literally hundreds of guards in riot gear, a few red shirts awaiting the arrival of their masses, and a couple photographers – that was it.  It was a very surreal experience to see dozens of soldiers lined up, and then in unison all raise their guns. 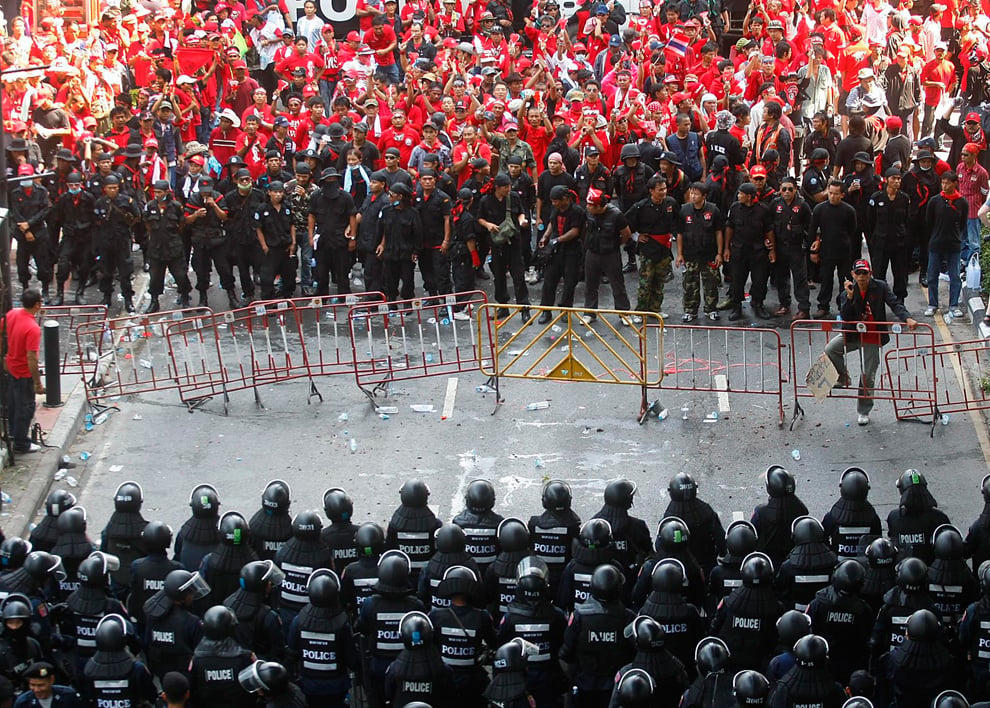 Protesters stand off. (Photo from The Big Picture)

Bad things were going down, and this was something I did not need to be a part of.  We found a couple motorbikes to take us away from the danger zone, and we could hear the fire from rubber bullets being shot as we left.  It would be about two hours later when the larger group would actually arrive and clash with the police.

Ok, so everything is good now right?  We were able to get to touristy Khao San, Jodi met her friend, and I could look for my guitar.  Well at this point enough had happened that my priorities had changed slightly.  No longer was I thinking about the guitar, but instead couldn’t help but notice the congregation of reds at the end of Khao San on Thanon Tanao.

It was like a scene from Braveheart.  All of the riot gear clad soldiers on one end, and hundreds of red shirt supporters on the other, with about a 100yds of empty middle ground between them.

From there we headed out to the main street of Kok Wa which leads into Democracy Monument.  Here there were a large gathering of protesters and you could tell that the mood was much different than the almost jubilant feel of previous rallies.  The leaders were furious, and did an excellent job of riling up their supporters.  A military helicopter slowly circled, and every time it would pass the masses would scream and shake their fists in disgust. 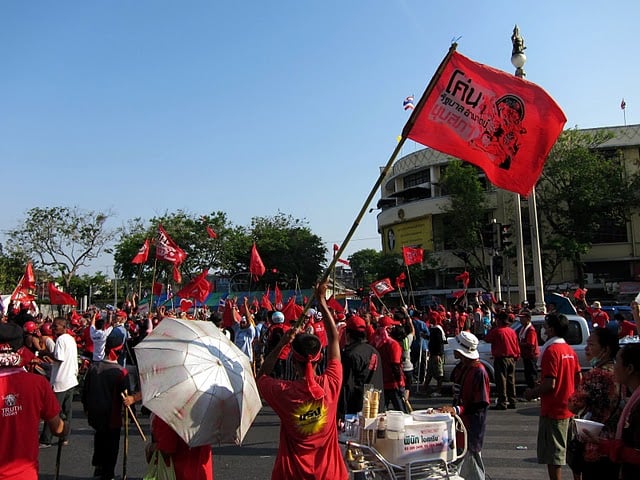 What was really alarming were the amount of people walking around with blunt objects and/or very sharp bamboo poles.

While there, I met a nice Thai man who translated everything that was going on and was able to provide interesting commentary regarding the history of the government.

Around 5 we noticed that the helicopter that had been circling was beginning to get lower and lower.

That can’t be good.

And then about 200 yards away we saw something fall from the chopper.  Seconds later plumes of white smoke were filling the street.  Still being quite far away, I didn’t think too much of it.  Or at least I didn’t until 15 minutes later when they dropped one about 50 feet from where we were standing. 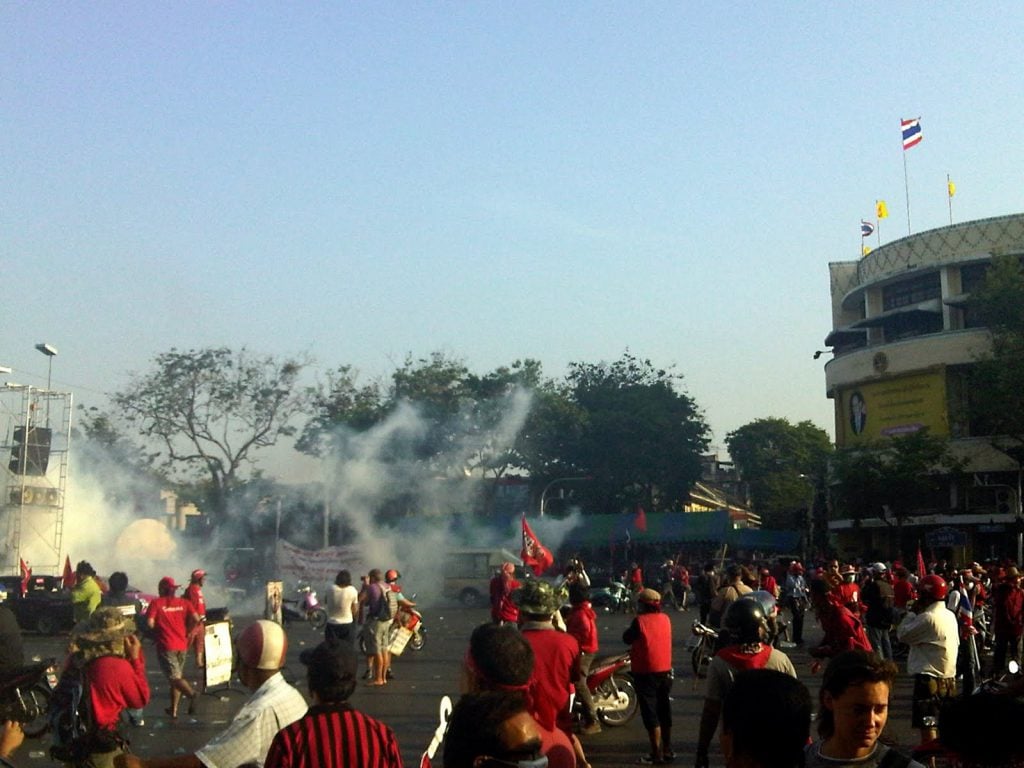 Almost immediately you could feel your eyes well up and your mouth and throat burn.  We fled with many others to nearby Khao San (which at the time a bit of a safe haven from the events taking place on Kok Wa).

It was at the point we realized that nothing good was going to come from this and we should probably try to head back to Victory Monument, which in itself would be no easy task due to the road closures around town, and the fact that the entire BTS had been shut down.

Upon walking back to find a tuk tuk, I noticed a man selling a few guitars on the street.  I picked one up and started playing it, and didn’t find myself very impressed.  Then he told me to try this other one which he said had “much better sound.”

That was an understatement.  This thing was night and day better, and only cost an extra $10.  I was hooked and made a semi-impulse buy considering all of the days events, I had frankly kind of written off the guitar search for the day.

Unfortunately, the rest of the story doesn’t end as happily.  About two hours after leaving, the army finally did move in and the area where we had been standing peacefully essentially turned into a war zone with gunfire, molotov cocktails and repeated explosions.  As of this writing there have been  15 confirmed deaths and hundreds injured.

To say that this has been a startling and eye opening experience would be an understatement.  Living back home, you would hear stories such as this on the news all of the time and not think anything of it.

It also amazes me at how little coverage there seems to be about it in the world media.  Or at least that is the impression I’ve gathered from sites such as CNN.

I also want to reassure any one who cares about me that I’m completely safe.  I may have run into a bit of “wrong place/wrong time” yesterday, but my neighborhood is far away from everything that is going on, and I have no intention of taking any more treks over the next couple days.

However I do like the suggestions of heading into the thick of things with my new guitar in hand to try and spark a rousing chorus of “All You Need is Love”.  What do you think? No? Ok

If you are interested in following this story check out @bangkokpundit on Twitter for the most impartial updates..

If you enjoyed this article be sure to check out my email updates and RSS Feed. Also check out the new Location 180 Fan Page on Facebook if you haven’t seen it yet.