A big part of the DNA of this website is travel. And you don’t travel for 3-4 months out of the year for a decade without ending up with some pretty interesting travel stories.

In the past two weeks I’ve been to Guangzhou, Hong Kong, Singapore, Saigon, Phnom Penh, Siem Reap and Bangkok.  So rather than write long narrative about each of those places, I figured I’d just share a few quick little stories to give you some insight into the life of a traveling entrepreneur.

I don’t get to do nearly as much travel writing here as I’d like, but the fact remains it’s a big part of this blog, lifestyle, and my life. I’m also a firm believer that every entrepreneur should travel more.

Depending on the response I’ll do this again for the second half of the trip.

Travel Story #1: When Your Friend Forgets Your Coming to China to Visit…

After an arduous 25 hours of travel, and a pollution attack on my layover in Beijing, I finally made it to Guangzhou, China – my first destination.  I touched down at about 12:30am, breezed through customs and had every intention of meeting up with my friends in the Zhujiang New Town part of the city.

A few calls from the airport went unreturned, so I hopped in a cab that promptly proceeded to rip me off.  Upon trying to tell him to turn the meter on, he pulled over 20 minutes from the airport and threatened to let me out.

Another 20 minutes passed and I was wandering the streets of China having no real clue where I was going.

The rest of this story can pretty much be summed up in this video:

After a work-filled week in China it was time to take the train up to Hong Kong for a night so I could catch my early flight to Singapore the next morning.

After my accommodations fell through I promptly turned to trusty AirBnB and found a place right on Lan Kwai Fong in the heart of Central Hong Kong.  For those of you who have never been to HK, Lan Kwai Fong is the undisputed party champion of the city.  It takes up one giant city block (and then some), and has bars and clubs everywhere you look.

I’ve been to Hong Kong twice before and each time has been for one night before flying out. Each time I end up on this street getting drinks.

So when booking, $75 seemed like a steal for a nice private room right in the heart of things.

Oh, how wrong I was.  While my hosts were great, and I even went and met up with them and their friends, once my head hit the pillow I realized where I was. One giant melting pot of partiers from every walk of life imaginable.

Thumping music, screaming 20-year-olds, dry heaves from the girl puking outside the window.

I could deal with that, however it wasn’t until 5:30 rolled around that things got really interesting.

Apparently, a slightly inebriated German man got locked out of somewhere by his friends.

What followed was about an hour of pained screams, death threats, door pounding, and me thinking this guy may just bust my door down.  I couldn’t figure out if he was on the street, in the hall or on the floor above me – the screams just poured in from every crack and crevice of the paper-thin apartment walls.

Then I woke up and went to the airport.

Note: I’ve been back to Hong Kong a few times since this, including when I did my daily vlog.

One of the things I’ve been most excited for (don’t ask me why) on my needs-to-be-updated bucket list was to have a Singapore Sling at it’s the birthplace in Long Bar at the Raffles hotel.

I wasn’t planning on making it to the most expensive place on earth on this trip, but a cheap flight and 18 hour layover were just enough to make my dreams come true.

I touched down and Location Rebel member Justin was cool enough to show me all over the city. We saw some incredible places, and of course, went and had a couple Slings down at the Raffles.

However, after a couple people on Twitter pointed out that I was in fact not in Long Bar due to the lack of peanut shell throwing, I realized I never actually made it to the bar I’d come so far to see.

While I did have a Singapore Sling at the Raffles – and that’s enough for me to cross it off – I didn’t do it in the original bar.

Justin, I guess that just means next time we’ve gotta go back! 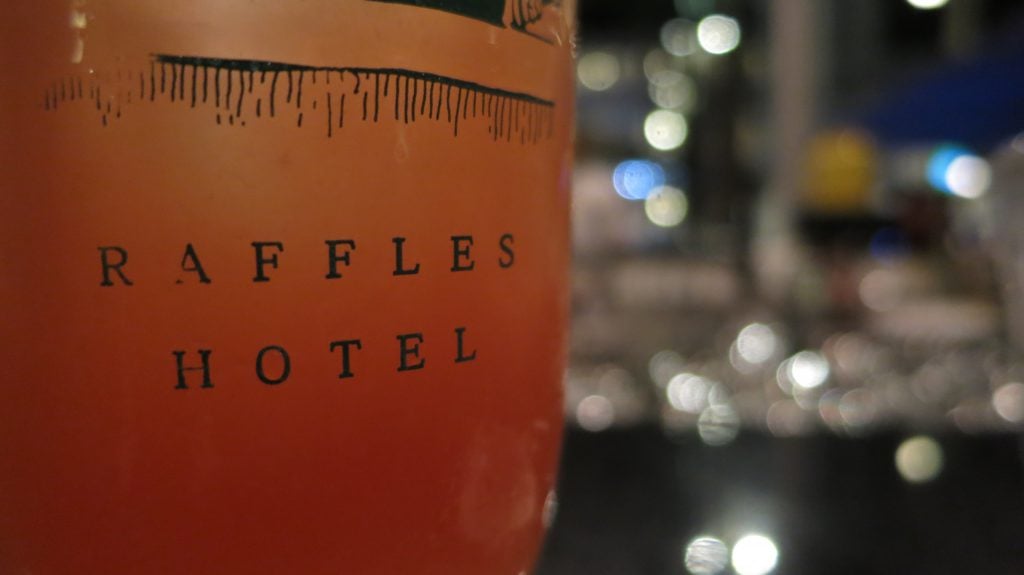 Singapore Sling at the Courtyard in the Raffles

Update: 2 years later I made it back to Singapore as part of my honeymoon, and we were finally able to enjoy our Singapore Slings at the proper bar:

Upon taking off from Portland I had a pretty loose itinerary for the next month, however one major plan was to spend a few days in Saigon – since I’ve always wanted to visit.  I was pretty sure you needed a visa, so I’d just planned to pick one up from the Consulate in Guangzhou.

Then I made the stupid decision to take someone else’s word for it, when a couple friends swore that you could get a visa on arrival.  Ok cool, sounds good to me!

It wasn’t until an hour before leaving to go to the train station for Hong Kong that I thought to double-check.

Good news: You can get a visa on arrival.

Bad news: You still had to have a “pre-approval” letter.

Great. What the hell is that??

After a little research, I ended up paying a 650% premium to get my approval letter same day.

It all worked out, I got my letter and breezed through customs once getting on the ground, but there was about a 12 hour period where I was pretty seriously concerned about whether or not I’d be getting in the country.

Travel Story #5: It’s All About the Highs and Lows

One of my favorite things about the way I travel is the fact that one minute I can be in one of the fanciest bars or hotels around, and the next I could be eating street food on a rat-infested corner.

Baller suite or bungalow that smells like feet – it all makes for a story. 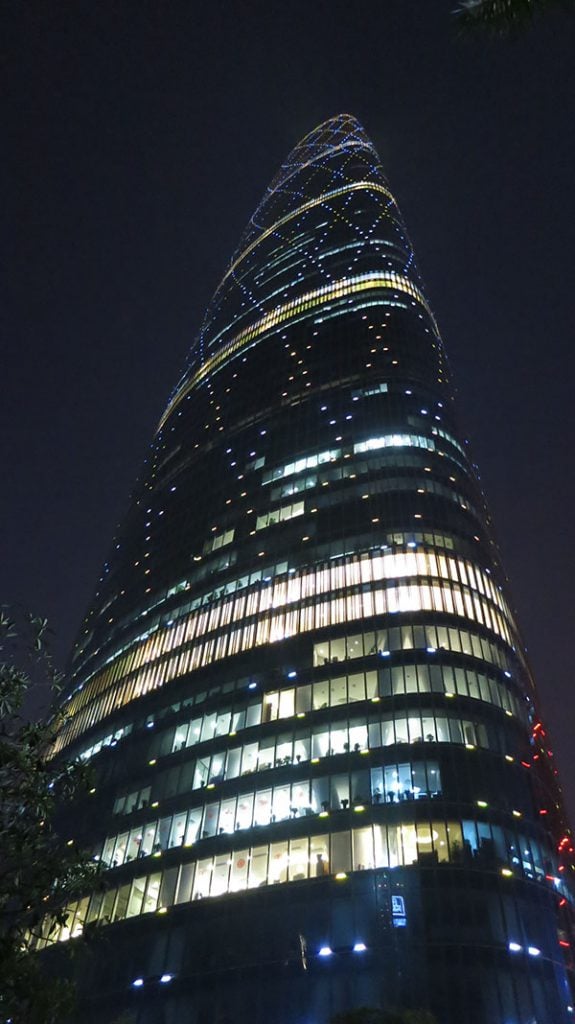 On my way to Tien Bar on the 99th Floor

This trip has been a great example of that.  Tien Bar 99 stories up, followed by dinner at a dirty local Chinese restaurant.

$26 Singapore Slings one night, and $.50 Saigon Green beer the next. The best trips are the ones where you get to experience it all and this has definitely had plenty of both.

Plenty More Travel Stories Where Those Came From…

Like how about the time I accidentally interrupted one of the most famous people on Earth.

Or the time I was supposed to going to a bar in the mountains, and somehow ended up at the ocean?

I could talk about the “death bus”, the most painful 6 hour delay ever, or eating at my favorite restaurant in the world, but I think for now I’ll leave it at that.

Any questions about travel and working on the road?  Just drop a comment and I’ll get you some answers!

However for now, I’m going to enjoy my last couple days in Bangkok before heading out to the island paradise of Boracay.

Want more travel stories? Check out this recap of our recent 2 month sabbatical trip around the world. 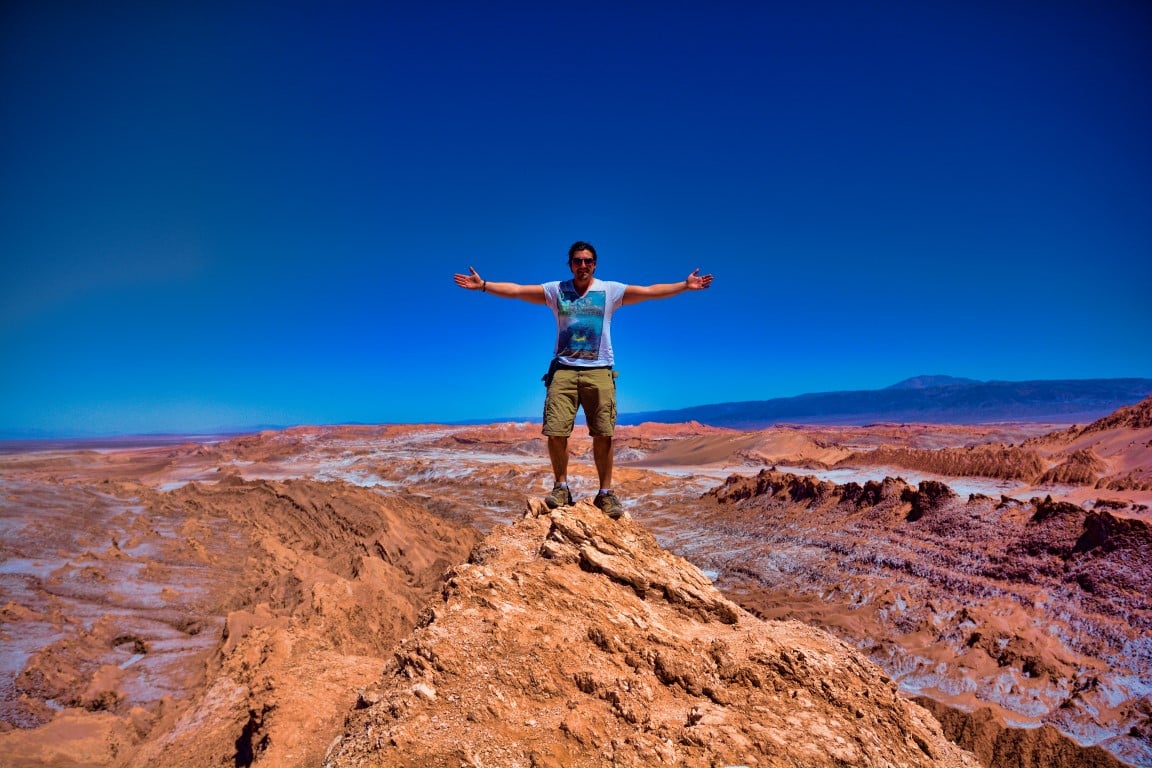 Moving to Asia is one of the best ways to start a lifestyle business. It's not just the cheap cost of living that makes it worthwhile.