What I Learned from Doing a Daily Video Blog 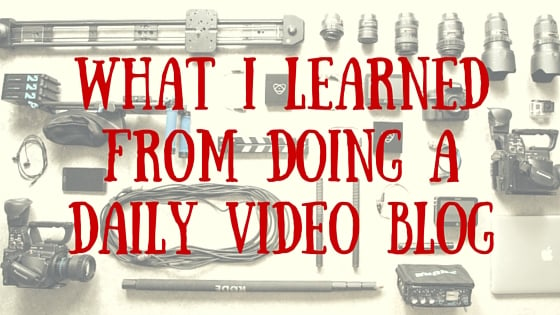 I remember the first time I watched one of Casey Neistat’s daily vlogs.

All I could think was “this guy is crazy.”

I mean who on earth can come up with an interesting story, shoot the story, edit it, and post it every single day – while not sacrificing on quality and entertainment.

Yet, day in and day out he did it – and I was transfixed.

I started by creating a weekly vlog, which I did for about 4 months – and had a little bit of success with.

And the more I thought about a daily vlog, the scarier the thought became.

Until finally, one day, I decided to actually go for it.

I’m not narcissistic enough to think that my life is sooo interesting that everyone would want to tune in every single day just to see what I would do next.

But I did have some pretty specific reasons for wanting to give the daily thing a shot:

There were a few other ancillary reasons – but those were the primary ones.

So how did I fare?

The results weren’t entirely what I was expecting, and that’s what today’s post is about.

In it, I’ll share some of the lessons I learned from doing a daily vlog, and hopefully help you establish whether or not this is something you’d potentially like to do in your own life.

Also, want to make sure you don’t miss any future video posts? Subscribe to our channel here.

Also want the vlog version of this post? Check it out:

In the month that I spent vlogging daily, I gained right around 500 subscribers.

Now don’t get me wrong, that seems like (and is) a decent amount of people.

But when you factor in how many times I mentioned the vlog to my email list, on blog posts, on social media, to friends, family etc. it really isn’t that many.

I honestly have no idea how some people with hundreds of thousands of followers got there. For as much time as I’ve spent on You Tube, I still don’t really understand it.

This one is a given, and even though I knew logically this would be the case – I still wasn’t fully prepared for it.

I would usually shoot my vlog throughout the course of the day. On days where I was feeling lazy or wasn’t doing anything interesting, I’d just setup a camera and mic and talk about a specific topic.

I’d usually edit from 6-8am the next morning and post.

All told it would usually take 3-4 hours per video.

That’s 3-4 hours I wasn’t spending on my business. I didn’t end up putting in more hours of work in the day, I just spent less time on the stuff that pays the bills.

3) I expected my videos to get better as time went on, but they got worse

Because it took so much time to create these, instead of my skills and videos really improving, I started to rush them.

Even though I generally enjoyed the process, I tended to just try and push them out so that I could focus on the other things I was neglecting.

I alluded to this in each of the last two points, but I did notice a little bit of a dip in sales during the month of April.

Whether this was a direct correlation or not, I’ll never know, but I felt like I didn’t work as hard on the business I should have.

5) No matter how many interesting things you do, you’ll still have days that are pretty boring.

This was a big one.

As I mentioned, part of the reason I did this in the first place was to force myself to do more interesting things.

Which I absolutely did! I took a trip to Vegas, and an impromptu trip to Hong Kong for the sole purpose of having interesting things to vlog about.

But on days when you’re sick, or just putting your head into your computer and working – it’s really difficult to make those days exciting.

6) I achieved my number one goal

My number one goal, more than anything, was to cultivate more discipline for myself – and I absolutely did that.

By the end, I would leave friends in order to make sure I got the vlog done.

The editing time in the morning has translated to creative/writing time instead – so even though I’m not shooting videos every day, that habit is still there – and it’s something I’m really pleased with.

Put aside being You Tube famous for a second. If you’re trying to create positive change in your life, or build a positive habit – doing something as public as a daily vlog is an incredible way to do that.

Couple that with a Pavlok and you’re basically guaranteed to succeed!

I get super nervous shooting around other people.

This includes both friends and strangers. But what I found was that most of my friends ended up not caring as much about me putting a camera in their face, the more I did it, the more I stopped caring about the strangers.

The key was just not to make eye contact 🙂

8)  Doing it daily kept me from doing any marketing

One of the things I learned early on in my blogging career is that more posts doesn’t necessarily mean more sales and traffic.

It’s usually better to create fewer posts, but spend more time on the marketing for each one.

You Tube videos are no different. Put more effort into creating something useful and entertaining, and then market the hell out of it.

There are people out there that do true daily vlogs. 15 minutes with little editing, just showing them hanging out with their friends, running errands, etc.

I never enjoyed that. I’m not interesting enough to make a vlog like that. So I always tried to have a takeaway.

Some sort of actionable piece of advice for the viewer to latch on to. But when you have to film a 20 hours of you on airplanes, you’re exhausted, and just want to sleep – that can be difficult.

Which leads to the next point, and an important lesson for future vlogs…

10) People liked the sit downs more than the travel videos

I always figured the videos of me on the road, out around town, or doing interesting things would be the ones that got the most traction.

The reality was that it was often the ones of me just sitting in front of a camera talking that got the most love.

Take this post about niche sites for instance. I shot it just before I started doing the daily vlog, but it’s got about a 100 times for views than most of the daily ones:

This was an important lesson, as I’ll spend more time focusing on this during future vlogs.

11) Invest in the Right Type of Gear

I used a Canon G7x for pretty much all of my videos, and it was great. The video quality was good, and it was a great size.

But the sound sucked on it.

I shot this entire video on my iphone, and no one said a thing:

However, I’ve received a lot of comments about poor audio.

So it was actually my audio gear that ended up being the best investment:

When we were shooting The Desk both Steve and Jamie kept harping on me about finding my on camera persona.

Natural reaction? Go a little too over-the-top and actor-y.

Occasionally I would fall into just the right place and they would comment on it. I don’t think I always found that place, but I think the final daily vlog was narrowing in on that.

So what does all of this mean? How will I take these and apply them to the future?

Here are my biggest takeways:

Thinking of getting your own vlog going? Check out this post where I share some 31 ideas for your vlog.

Thank you so much to everyone who tuned in during the last month! Is there anything you’d like to see you in future vlogs or posts? Leave a comment and let me know, and don’t forget to subscribe to the channel!