It was November 19th, 2005 and the stadium was shrouded in a thick, soupy fog.

The home team was winning in a rout, and everyone was ecstatic. None more so than me.

But my excitement was for a completely different reason.

To understand the full story, we need to back up a bit.

While I was in high school and college I went to every single University of Oregon football game for 9 years.

You see, I was on the team that ran the “fan cam”.

What this essentially meant was that I got paid to put my drunk friends on the Jumbotron during football games.

You wouldn’t believe the “cool” points that got me during the early years in high school. 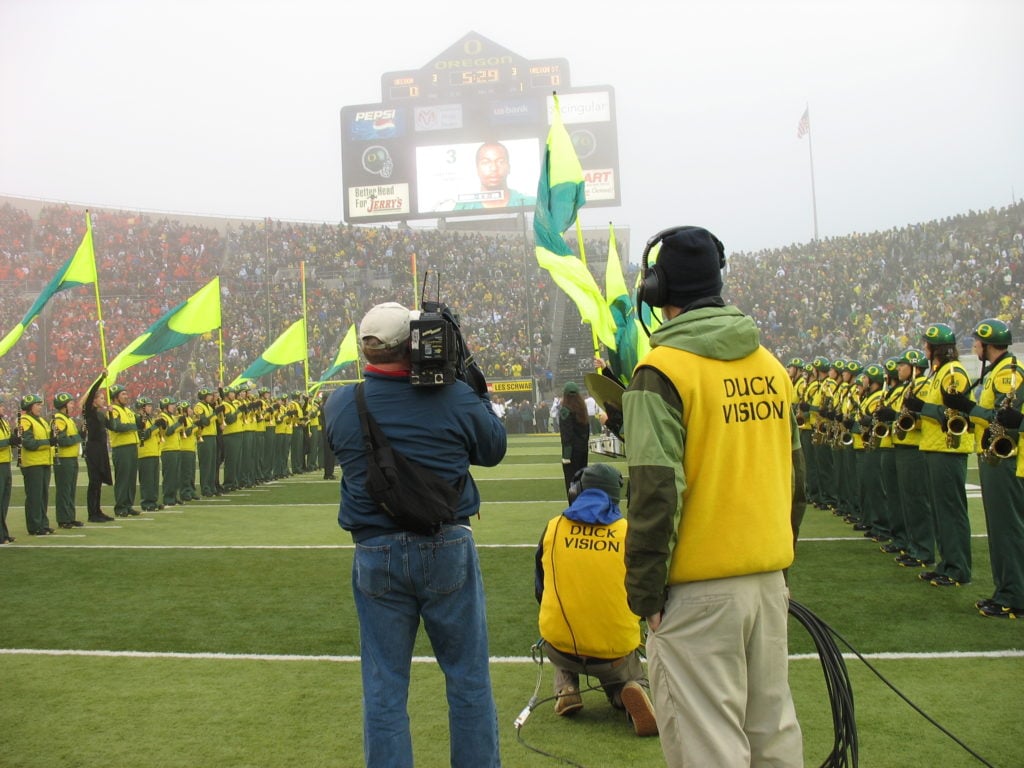 Or at least it would be cool if it weren’t for this ridiculous “Duckvision” vest.

It’s a pretty wild feeling to be standing in the middle of the field during the national anthem, and having 58,000 people staring directly down at you.

Or at least looking at the flag right next to you, but it’s a pretty cool feeling nonetheless.

While in high school I was what was known as a cable grip.

This meant I sherpa’d a 500 foot, 75 pound video cable up and down through the stands as we sought out the fans who exuded the most school spirit…or at least a willingness to make a fool of themselves on a giant TV screen.

As the years progressed though, I moved up the ranks from cable grip to camera guy.

And you wouldn’t believe the things people would do or offer to get on that big screen.

There were sorority girls flashing, giving me their phone numbers, owners of breweries offering free kegs, or the people who would toss me down free drinks from the skybox.

Yes, it’s safe to say I look back on that job fondly.

But as I progressed through the camera team ranks, not everything was easy.

In fact, there was one day out of the year that my job was borderline painful.

The annual Civil War game is when the University of Oregon Ducks play they’re in state rivals the Oregon State Beavers – who are about an hour up the street.

Growing up in Eugene and going to every Duck game for years, it’s impossible not to become a fan.

Yet, I made the unpopular decision in Eugene of deciding to go to school at Oregon State.

This meant that for the duration of my college career, I’d have to skip Oregon State games to drive back down and work the U of O games.

You can imagine the amounts of shit I got from my college friends for this.

But on November 19th, 2005 – it all became worth it. And in a roundabout way became one of the most motivating factors in my decision to leave my job 4 years later.

It was Civil War and Oregon was dominating the Beavers. So everyone in the stands was pumped up.

This game was also notable for the incredibly thick fog that rolled in around the first quarter.

In fact, it became so thick that our camera guy in the press box couldn’t see the field. 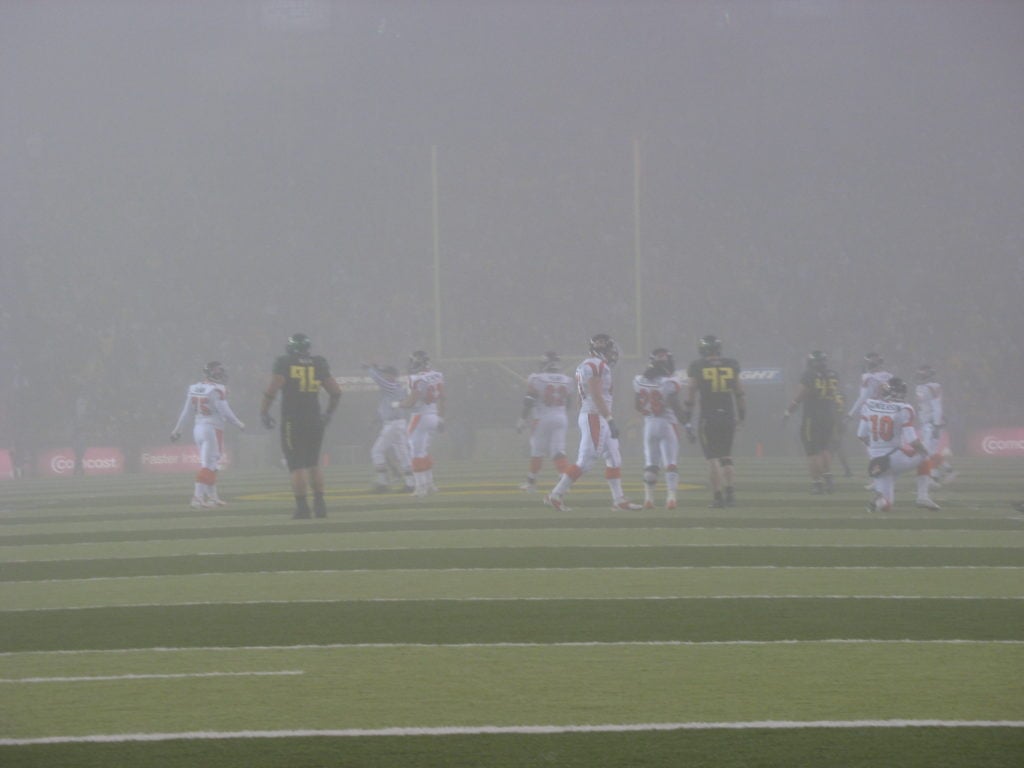 The fog rolled in hard

So instead of roaming the stadium looking for drunk fans to glorify on “Duckvision,” as it was named, we were called back down to the end zone in order to shoot the game, where the camera could actually get a clear shot.

This was my last year before taking the reigns as a cameraman, so when you’re a cable grip with a camera guy that’s just standing in place, there isn’t much to do, but sit and watch the game from the sidelines.

At one point, as I’m wearing what was admittedly the stupidest yellow vest imaginable (emblazoned with the words Duck Vision across it’s back), I could sense someone was coming up behind me.

Before I could turn around, I heard a man behind me yell in my year “Man, what do you think about this game?!”

Despite the slaughter my alma mater was receiving, the fact remains, I’m still just as much of a Duck fan as a Beaver fan (I’m a very rare breed here in Oregon).

So I turned around and said, “It’s incredible!”

To my surprise, as I turned around the person standing behind me was not who I expected.

Rather than some team assistant, or person who fell into a sideline pass they shouldn’t have had, I was looking directly at Uncle Phil, as he’s affectionately referred to in Eugene.

And if you still don’t know who that is, Uncle Phil is none other than the Founder of Nike, Phil Knight.

He’s a complete legend in the city and state.

We ended up talking for about 5 minutes as he showed genuine interest in who I was and what I was doing down on the field.

As luck would have it, earlier in the week I’d purchased a brand new digital camera. A shiny new Canon a610 for anyone that cares.

As we were about to part ways, I somehow mustered up the courage to ask for a photo. Without hesitation, he shouted, “of course!”

And we took this photo: 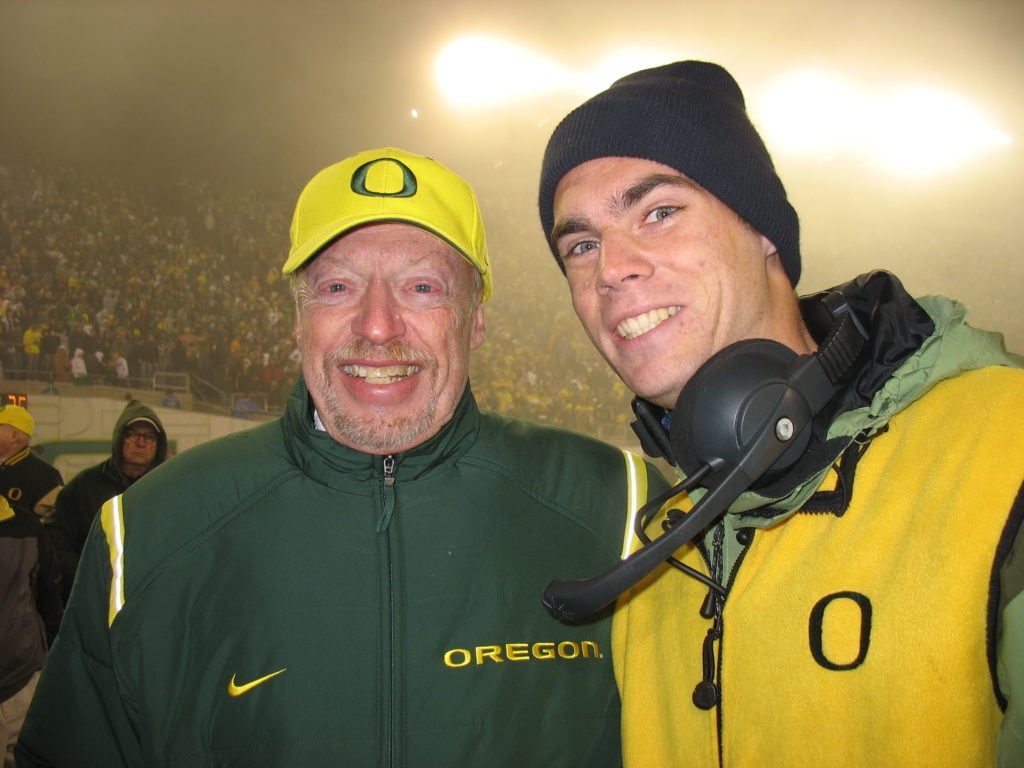 I had no idea this photo would be so motivating. It sits on my desk at home to this day.

Now, you might be wondering why on Earth I’m writing about this.

The reason I’ve now devoted 884 words to this story, is because that photo played a big role in my inspiration to want to run my own business.

A couple years later I’d go on to get a day job in finance, and I had that photo sitting on my desk from the day I moved into my office until the day I left.

I’d look at it every day as a reminder of why I wanted to run my own business and be an entrepreneur.

In previous posts, I’ve talked about ways to get what you want in life, and using physical objects to help you exude confidence.

For 3 years while I was working for someone else, this photo did those things for me.

It was a reminder to not forget about what I really wanted in life, and to continue to pursue my goals no matter how weird or unconventional they might seem.

I’ve created more memorable stories, had more adventures, and helped more people during that time than I’d have expected to in a lifetime.

Thanks for the reminder to take a chance and do something you believe in, it worked out better than I ever could have imagined.

I still have a goal of having coffee with him one day. Hopefully, at some point, I can thank him in person.

If you haven’t read it already I can’t recommend his memoir Shoe Dog highly enough.

Want the extra motivation and support to build a business of your own? Let me help. 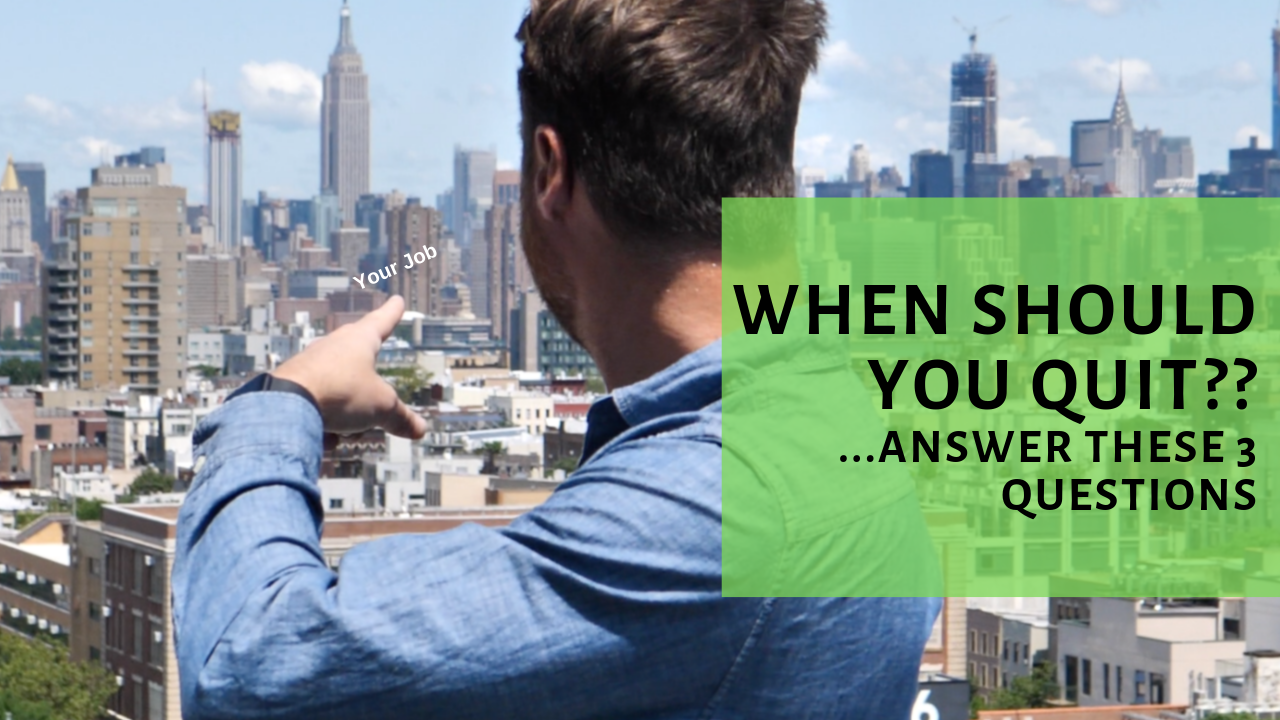 When Should You Quit Your Job? Questions to Answer First

Thinking of quitting your job? Answer these 6 questions about your transition, and you'll be way ahead of the game emotionally. 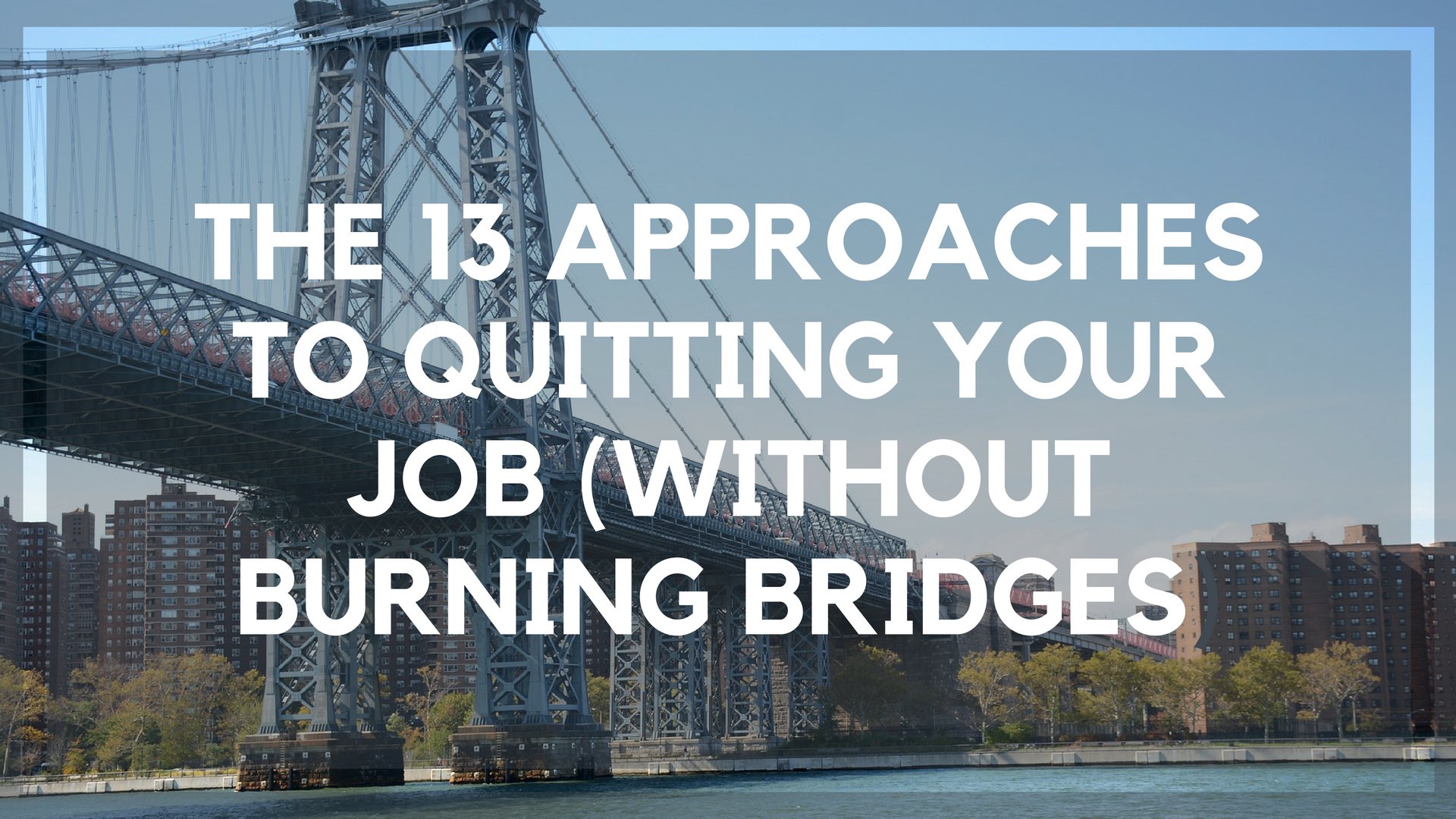 How to Quit Your Job Without Burning Bridges (13 Easy Strategies)

Trying to figure out how to quit your job without burning bridges? GREAT. These 13 easy strategies will help you quit once and for all on good terms. 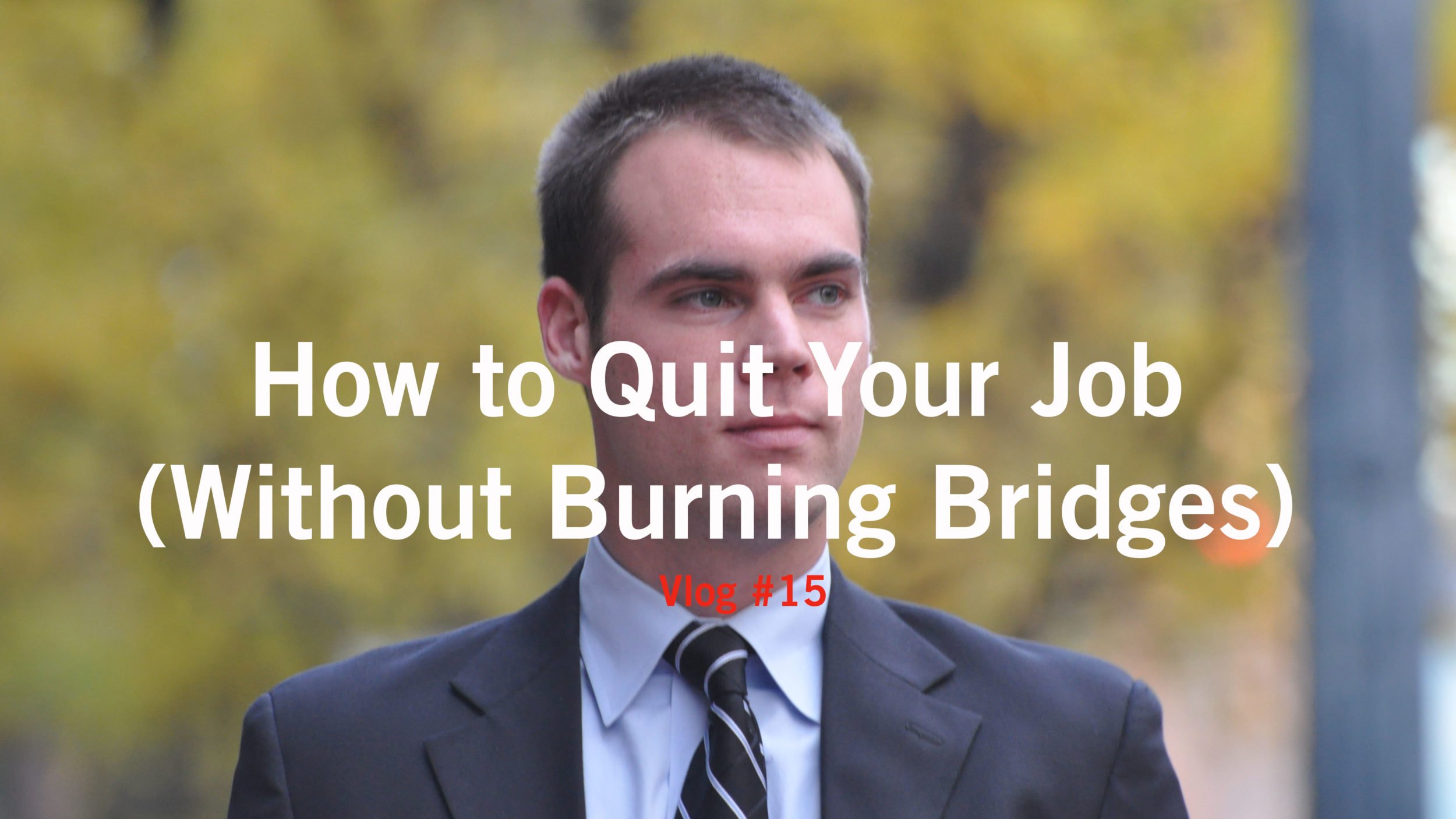 Trying to figure out how to quit your job? This video shows you how to prepare and gives 5 strategies for how to tell your boss.