This post was originally written in January 2010 days after moving to Thailand for the adventure of a lifetime. It has been largely unedited since that time.

Well, I am currently about halfway through Asiana flight 243 en route to Seoul, South Korea.  So far the trip has been fairly painless, aside from arriving in SFO about half an hour late due to a delay on the tarmac.

NOTE: Sorry I am a few days late in getting this posted!  Between jet lag, Ayuthaya ruins with my buddy Cody, and lack of wifi, I haven’t had the time to post!

I was really excited to see the difference between flying a domestic airline (such as my usual United) and one of the great Asian airlines I have heard so much about.  The results so far are a bit of a mixed bag.  My seat is definitely more cramped than I had hoped, and there isn’t a power supply anywhere close that I can use.  Although the interactive entertainment center has more than enough new movies to keep me occupied, and I even just got done watching Butch Cassidy and the Sundance Kid.

So while the plane itself has been a slight let down, the service is second to none.  Hot towels? Check.  Wine and Whiskey? Check.  HUGE steak dinner? Check. However it felt a little weird to be eating at 2 in the afternoon, but I suppose I have to get acclimated to the time change sooner rather than later!  All in all I have been very impressed with the level of service on the flight, I just hope it keeps up for the next 6 hours.  Aaaaaand then during the next 6 hour flight.  Who would have thought Thailand was so far away?

Anyway, back to the point of this post. One of the things I promised I would do is give a little bit of a more in depth look at what I decided to pack for the trip.  Packing this time around was more difficult than it has been in the past, for two reasons.  One, I’ve never had to pack for a 6 month trip before.  Two, I usually don’t travel with a computer.

My original plan was to bring my Gregory 55L pack, a North Face Surge day pack for my computer, and a separate case for my new camera.  It only took about 2 days of this plan for me to realize that this would be a hell of a lot of stuff to carry around.  With that in mind, I decided to forgo the larger bag, and stick with nothing but my North Face Surge and camera bag.  I figure if I can go an entire month in Europe with NO bag, then this should be a piece of cake!

Well the reality so far is yes and no.

The packing actually wasn’t too bad.  I was able to fit everything that I had hoped to, with little sacrifices.  It is only after carrying it around for the past 14 hours that I realize maybe smaller isn’t necessarily better.  You see, this pack wasn’t meant to carry much weight.  Where I could have packed 40lbs in my larger bag and still been pretty comfortable, 25lbs in this one is hell on my back.  So time will tell if this was a good choice or not.

As much as I tried to be an ultra-light packer, I know I failed miserably.  Simplicity has not been one of my strong points, and I’m sure the purists out there will laugh at my list.  But, I am going to tell you what is on it anyway with the understanding that half of it could get dumped at some point! 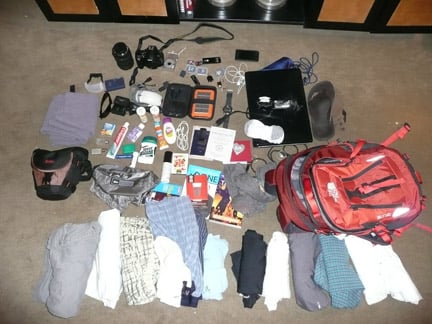 There may be a few things missing, but this is the gist of it…

1 Pair of Board Shorts

1 Adidas Nylon Shoe Bag (to use as a day pack if needed, it took up no space and I could easily leave it at the bottom of my bag)

This is the one that makes me feel like a true Flashpacker.  It scares me a little bit to think of all of the electronic stuff that I have crammed into one pack!

Starbucks instant coffee (who knows if I will be able to get good coffee there??)

Getting Things Done by David Allen

Well more or less, there you have it!  All of the useful and/or ridiculous things that are in my much too heavy day pack.  But hey this is an adventure right, and part of the whole idea is to live uncomfortably from time to time!

It should be interesting to see what happens upon landing.  My clock reads 6:19pm on January 5th, but I have absolutely no clue what time zone I’m actually in, or even what day it is for that matter.  According to my interactive map, I am somewhere near the International Date Line.

So let me know your thoughts on my packing, just don’t make them too harsh! If you can think of anything that I should have packed, or things you absolutely know I won’t need, tell me about it.

There should be more to come in the near future, assuming my laptop battery doesn’t totally die on me.  My regular posting schedule of Monday and Thursday could change a little bit over the coming weeks, as I am just going to try and get things posted whenever I can.  But who knows, maybe this means more Thailand updates?  We’ll find out!

Quick Note: If you are one of the people I said I would get a hold of during my layover in SFO, I am sorry, as much as I tried, I could not find wifi.  Hopefully, I will find it in Korea and I can give you a nice 1am wake up call 😉