Let us back up for just a moment to two weeks ago, when my sister came to visit.  She was very excited to see all of the sites and experience all that Bangkok and the southern islands had to offer.  Of course, this means the infamous fire shows on Phi Phi.

Me, practically being a veteran now, was more than happy to take her and show her the ropes during our one night stay on the island.  After all, I had done the fire jump rope, flaming limbo, and various other pyro activities numerous times during my stay here, so I figured I was immune to the potential dangers of it.

After polishing off a bucket or two, we decided as a brother/sister duo to tackle the jump rope and make a great video to send back to mom and dad  (I apologize for not including that video, I never got a copy of it from her – so a previous one had to suffice).  What I didn’t anticipate was that halfway through our escapades, she would would run away, leading the “fire masters” to let the rope drop – directly on to my foot.

At the time I didn’t think much of it, aside from, “wow, that is going to hurt in the morning.”  We went on about our night mingling with Scandinavians and watching our friend, “Maui Sunrise” try to work his game for the evening.  Everything should have been fine…right?

Fast forward to yesterday.  I have a festering burn on my foot the size of a half dollar that is slowly eating into my skin.  I’m asleep, and all I can think about are the prospect of gang green and an amputated foot.  Hmmm, I think its about time I get this looked at.

On the plus side, thanks to multiple people on twitter, I’ve decided that “Festering Burns” would make a great name for my new band.  All I need is that guitar, which has been difficult to come across thanks to the red shirts blocking half the city.  But that’s a different story entirely. 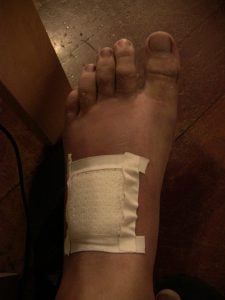 You don’t want to see what it actually looks like….

Anyway, yesterday I hopped on a motor bike, and thanks to my trusty language guide was able to spit out the word “rong payabarn” or hospital.  Who knew there was one a mere 2 minute ride from my apartment?

I arrive and walk inside, and it didn’t take long to realize this wasn’t one of those medical-tourism-expat-hospitals you hear all about.  Oh no, this was about as local as it gets.

Generally speaking getting around Bangkok is quite easy, because almost everything is in English.  Well apparently someone decided that English wasn’t necessary at the local hospital.  I walk in and the only thing I can recognize a big sign that says “triage”.  Hmmm, ok. Lets try that.

I stumble my way through a conversation with the nurse, and finally it wasn’t until I showed her the aforementioned festering burn that she understood what I was doing there.  She walked me through some paperwork in Thai and told me to go to section “song” or two.  The surgery center.

This isn’t going to end well.

I sat and waited while they prepared my documents and finally asked me to come sit down so they could take my blood pressure and weight and such.  I noticed on the paper work that I was no longer Sean Ogle, but I will now forever be known as Shwon Gole.  How they got that is beyond me, but I suppose it sounds pretty close?

When they asked how to pronounce my name and I told them, there were about four nurses that just laughed, and said “no, your name?” 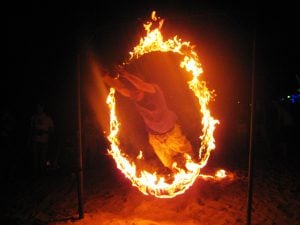 Yes…I totally deserved what I got. Lesson learned.

I finally got to the point where I was able to see a doctor, and he did, luckily speak a little bit of English.  He didn’t believe that my wound was in fact a burn, but rather he was convinced that it was the work of a jellyfish.  I don’t know which would have been worse.

He sent me over to have the wound cleaned and dressed, and as soon as the nurse pulled out the hydrogen peroxide, I knew I was in trouble.

Guess I deserved the pain of that for not having done a proper job cleaning it myself in the previous days.

A few minutes later they sent me back into the main lobby to collect my three prescriptions and pay.

Oh right, this costs money.  At that point, I was afraid.  If you were to walk into a hospital back in the states and have the exact same thing done, it would cost a few hundred dollars at the very least.  I was unsure of how things worked in Thailand.

But then something incredible happened.  As I was being ushered out, she said a word that I didn’t think was possible to say in a hospital.

She told me the dressing of the wound was…..free?

I love this country.

I would soon find out that it is a flat 300 baht ($10) fee to see the doctor, and then from there I just had to pay for my prescriptions.  This included burn cream, antibiotics, and pain relievers.

All in all the entire expedition cost me around 600 baht.  I am amazed, especially considering some of the horror stories I’ve heard recently about the expat hospitals charging an arm and a leg for basic services.

So, should you find yourself in Thailand with a minor ailment of any sort, you should definitely consider going to one of the more local clinics.  A big smile and a willingness to look a little clueless for awhile is all it takes to get fantastic health care.

Want help building a business that lets you travel whenever you want? I’m here to help.