How to Make a Hard Decision (Decision Therapy!)

Want to know how to make a hard decision? Unfortunately, I’m not sure I’m the best person to ask. My whole life I’ve been an indecisive person.

This was clearly emphasized recently as I was shopping for brown shoes for my sister’s wedding.

All I needed was a pair of brown dress shoes, this should take 10 minutes right? 4 stores, and a dozen potential pairs later, I sat in Nordstrom Rack looking down at my feet for about 15 minutes trying to decide between the two shoes. 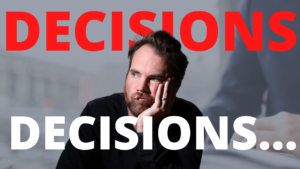 In the time I wasted trying to find not even the perfect pair, but a suitable pair, I could have gone and done so much more.  But I let my constant indecision get the best of me.

Why make a decision if you don’t have to?  There will always be someone else who can make it for you, right?

Talk about a dangerous way to live your life.

Over the last few years, I’ve started to drive myself crazy with my indecisiveness at times.

Often this can be masqueraded as “thoroughness”, as I’ll rarely make big impulse purchases. Instead, if I want something, I’ll go to a store, think about it, come back a week later, look at the product again, review all of the options online, and then maybe make a decision about actually buying something.

This is probably why the thought of buying shoes on the spot is apparently so difficult for me.

The former researches everything to death. The latter makes a decision quickly and moves on with their life.

You’d think the person who did the most research would be the happiest with the result, right? The reality is the opposite is true.

I’m not sure who said it, but there’s a quote that is something to the effect of “The only wrong decision is no decision.”

The times I’ve let indecision get the best of me, generally, nothing bad has happened. In fact nothing happens at all.

No adventure, no business growth, no risk, and no reward.

On the contrary, pretty much every good thing that has happened in my life has been the result of making a decision. Stay or leave my job. Move to Thailand or go find another job. Buy that plane ticket. Start that business.

Both yes and no can be powerful decisions – but what’s important is that a decision was made one way or another.

Want to get all the things you want in life? First you have to decide what those things are.

How to Make a Hard Decision: Decision Therapy

If you don’t want to make your own decisions, luckily for you, there are millions of people out there who would be happy to make them for you.  They’re the ones who will own the business you work for.

I don’t want to wander my way through life having only done the stuff that other people wanted me to do. Simple things like eating at restaurants I could care less about, or traveling to places I had no interest in seeing, quickly stack up.

I want to be deliberate in where I go and what I do. I want to know how to make a hard decision when I need to.

So starting today, I’m putting myself through what I’ll call “Decision Therapy.”

The premise is simple: I’m not allowed not to have an opinion.

For the next week whenever given the opportunity to make a decision, I have to take it.  Phrases such as the following are no longer part of the vocabulary:

In order to have some shred of accountability for this, I’ll be telling the people closest to me that if you ask me something, I will make a decision or at least have a firm opinion.

Is this something that should be sustained forever? No, not under most circumstances.  “What do you think?” can be a very powerful question and it’s very important at times.

But all too often I use that as a scapegoat for decision making. I pawn it off on someone else who often doesn’t have as much stake in the decision – which is never a good way to decide on something.

Perfect! Dark ones it is.”

So are you anything like me? Does indecisiveness ever get the best of you? What do you say to a little decision therapy?