Thailand: Not as Cheap as You Think

Over the past month of living in Thailand, I’ve learned something very important about myself: I am very easily persuaded. Now this could be perceived as either a good thing or a bad thing, and in the context which I am referring to it, its both.

When I first arrived in Thailand, I thought it was going to be the cheapest place on Earth.  And who knows, it still may be, but there are obvious caveats to any such blanket statement.  I would like to go on the record in saying that Thailand has NOT been as inexpensive on the whole as I expected it to be.  And let me also make clear, this is entirely my fault.

I’ve noticed a series of patterns in my life here that have led me to make this statement.  On most days I spend anywhere between 5 t0 8 hours in front of my computer.  Thats a lot of time with a mouse and coffee.  By the time I’m finished, I’m usually looking for some kind of social interaction.  After all, my room here is about as barren as it gets, and there really isn’t a whole lot to keep myself entertained after I’ve finished work for the day.  So the obvious solution, go out and be social! Which is entirely too easy in this city.

Every single night of the week in Bangkok there is something totally awesome going on.  And you (and by “you” I mean “I”) always feel as though you need to be a part of it.  There is a steady influx of

travelers and entrepreneurs to meet, and Cheap Charlie’s is always beckoning.  I’ve always felt justified in partaking in the evening activities as well considering how much time I spend working during the day. Every night someone is calling to invite me to do something, and it usually sounds like a great idea.  And even if it doesn’t, I now realize how easily persuaded I can be.

Well all of these nights add up.  Alcohol is one of the most expensive things in Thailand. In fact, I would almost go as far to say that it is MORE expensive here than back home.

I also realized that on any given week back home I would only “go out” a night or two a week.  Well, when you start doing this EVERY NIGHT, with an income that is substantially lower, the world starts to get out of balance very quickly.  And ok ok, every night may be a bit of an exaggeration, but still, more frequently than I should be.

Take last night for instance, two of my very good friends happened to be in town and we went to a club.  I paid 200 baht for a beer.  Thats almost SEVEN DOLLARS.  Yes, I just admitted to paying seven dollars for a beer, and I’m completely ashamed by it.  To put this in perspective that is 8 times the price I paid for dinner; which was one of the most fantastic dishes I’ve ever had.  Ever. 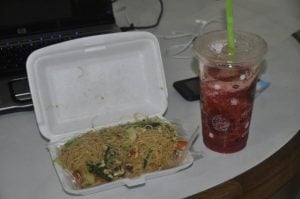 This is a great illustration of how Thailand can be as expensive or as cheap as you want it to be.  On many occasions I’ve gotten by all day on less than 100 baht ($3).  There are also days (nights) where I’ve spent a *little* bit more than that.

Bangkok will not stop you from spending money.  When living here, you have to be able to show a little self control, otherwise you will go broke very quickly.  On the plus side, I’ve still been able to get a tremendous amount of work done, as well as eat some of the most amazing meals imaginable, for next to nothing.  I think from here on out, less nights at Q Bar, and more with a book on my bed will be necessary.  Maybe if you are lucky, this new change will even prompt a few more blog posts, which I am very aware have been seriously lacking as of late.

Ok, now I am going to do a bit of a 180 with this post, just because this is something I’ve been thinking about over the last few days…

I still find myself constantly reminded by how much different my life is now compared to just six months ago.  I admitted for the first time today that this is the happiest I’ve ever been.  I’m being fulfilled in just about every way imaginable.  It’s pretty cool to spend months working up the courage to make a life changing decision, and then to see it work out even better than you could have ever hoped it would. What is even cooler is to be able to go back and read old posts documenting exactly where I was and what I was struggling with, and to see that those fears and insecurities have been overcome.

These posts are particularly interesting:

A lot has change in 6 months.

If you have been putting off a major change in your life because you are afraid of the uncertainty surrounding the decision, stop now.  Take the leap.  You won’t regret it. I promise.

What has been your experience living abroad?  Do you spend more or less money than you do back home?  Also, I am more than happy to answer any questions regarding cost of living in Thailand.  Feel free to shoot me an email, or ask in the comments and I will get back to you with my experiences!

If you enjoyed this article, be sure to check out my email updates and RSS Feed!