Getting to Know the Thai People

I’ve had a few requests over the last week from people who are curious about my interactions with Thai people while living over here.  I haven’t written about this as much as I would’ve liked for a few reasons.  Partially for the trivial reason of I have no idea how to spell half of the things I’d like to write about, but also because my interactions have been *fairly* limited.

This isn’t necessarily by choice.  With the language barrier being as difficult as it is, especially as a non-Latin language, you really have three choices for how to proceed.

A good example of this was the other night when I was out with Cody Mckibben the other night and we were trying to find a restaurant where some friends where at.  We were told to go to Soi Ruamrudee, however apparently we (I)  pronounced it wrong and went to Soi Ruambutri. Small mistake, big problem, as the two streets are on total opposite sides of town.  Once again, need to learn to enunciate when talking to the man in charge of where I get dropped off!

That aside, the best way I’ve found to meet local Thais is through food.  We all have to eat, and every single day I go to a local food stall or restaurant and get to interact with the people there.  There are two places in particular where within a week of when I started going on a regular basis, they knew exactly what I wanted, and upon sitting down I would practically already have a plate at my table.  Then I actually started trying to talk to one of the guys there.  Simply by learning the phrase “Khuṇn chụ̄ux xarịi” (once again, as mentioned, I have no idea how to spell many of these phrases), or “what is your name” I was able to open up a dialogue and start getting to know him and the people he works with.  Now when I go there instead of having the plate ready, he makes me order it myself, and will frequently teach me new dishes, along with other useful phrases.

Many people never even go that far.  I’m the first to admit that I could make more of an effort, but even by doing the littlest things you can enrich your experience immeasurably.  Just the other day, I asked the girl at my local fried chicken stall the same question.  Turns out she actually spoke fluent English and studied finance in Boston for three years.  I never would have known had I not asked the question, and now I have one more friend who can help me with the language, and is someone I can turn to should I ever find myself in trouble in this city! 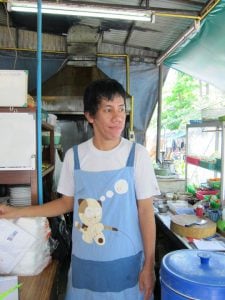 Best chef in Bangkok? Umm, I think so. (Photo Courtesy of Legal Nomads)

If there is one thing I can say about the Thai people it is that generally speaking, if you make the effort to talk to them, they are more than happy to talk back and help you with whatever you need.  People here will actually smile back if you look at them on the street.  This appears to be in stark contrast to some of the other Asian countries, where I’ve heard that people can be much less friendly towards people they don’t know.

I now have a Thai language learning tool and hope to continue to make progress learning some basic phrases and get to the point where I can have and understand basic conversation.  For all of the great expats and travelers I’ve met here, I know the final piece that is missing from a truly fulfilling experience is more relationships with the Thai people.

If you enjoyed this article be sure to sign up for my email updates, RSS Feed and the new Location 180 Fan Page!