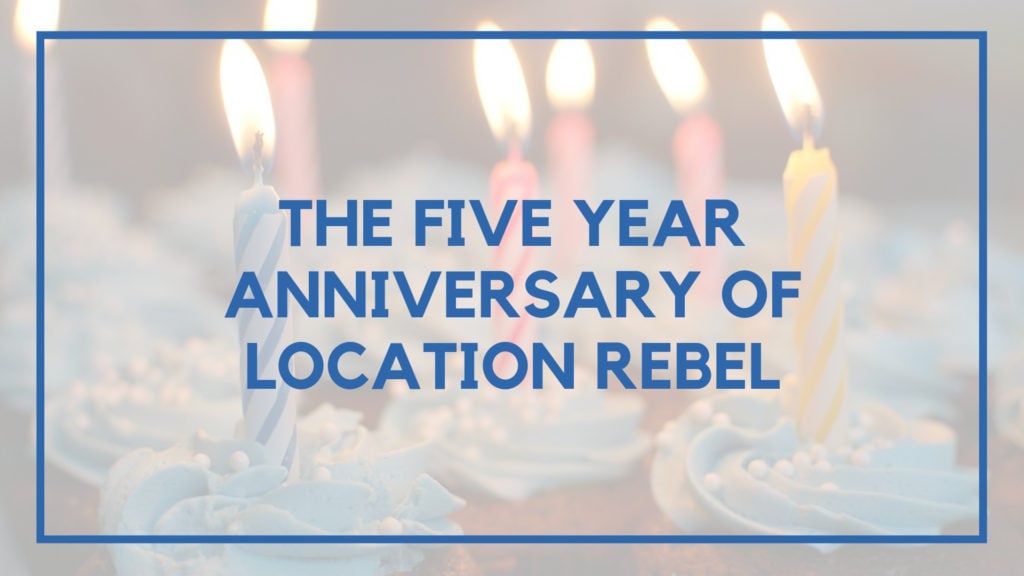 I’ve been trying to write this post for a week, and haven’t been exactly sure how to do it.

Then I was going to talk about some strategies for how you can start a business or a blog for yourself.

Now I find myself on the morning of the five year anniversary for Location Rebel writing this and having only one word swirling through my mind.

I had no idea that meeting would years later result in the lifestyle I have today.

Every morning I wake up and pinch myself, because it all just seems too good to be true.

And the coolest part? The reason I’m able to do that is because I’ve helped so many other people achieve that for themselves.

During my conversation with Chris, we talked about the very best part of our work. And it truly is the emails I get from readers and Location Rebel members letting me know I’ve had some kind impact, big or small, on a transition in their life.

I’ve got a secret to confess to, and it’s something that makes this all the more special for me.

Want to know what it is? I’m terrible at sticking with things. I’m great at getting started with projects that excite me, but I rarely see them through to the end.

I thought for sure when I wrote this post, that’s what would happen with Location 180. Do it for a few months, leave my job, have an adventure, go back to a new day job. That’s how it was supposed to work.

And here I sit, 1,827 days later and Location 180 still exists, and not only that, it thrives.  The dedication to this blog has translated over to other things. Golf, World Domination Summit, Pioneer Nation. These are all things I started and have been seeing through over the long term – which is something that never would have happened 5 years ago.

Over the last five years, I’ve seen sooooo many blogs come and go. In fact I can probably count on one hand the number of people who started around the same time as me that are still active.

I can’t speak for them, but there’s one extremely important thing I’ve done that’s allowed me to have continued success.

I work hard – but not too hard.

So many entrepreneurs think you have to be working 60 and 70 hour weeks all the time. Sure early on you need to work really hard. And you have to continue to work hard at times to maintain it. But I generally don’t overwork myself and I always make time for play.

My business may not grow as fast as some others because I’m not doing work on it day and night, 24 hours out of the day – but it’s been more sustainable because I don’t do that. I’ve had more fun during the process because work isn’t always the number one priority. I’ve essentially achieved balance when most entrepreneurs can’t, won’t, or don’t want to.

That’s the secret. Because I don’t overwork myself, during the times I am working I love it. I’m in the zone, it’s my primary focus, and I can give my all to it. But often, once noon hits, I’m out.

Take all of these with a grain of salt, but these are some of the lessons I’ve felt are the most important to my business, my success and my happiness over the last five years.

Help Yourself By Helping Others

This is probably the most important point I’ve ever discussed on this blog. It might be a bit cliche, but I’m a living example of the idea that if you want to get what you want out of life, help someone else get what they want.

The more you help, the more you get in return. As of today, I’ve written 424 posts on Location Rebel. That’s a lot of free, useful content. Put it all together and you have a site you could get lost in for days – most with the goal of inspiring and helping others to achieve their goals.

Had I continued to make this a personal blog, about nothing by my life and my pursuits, I might land somewhere in “inspiring” territory, but be totally lacking in the “useful” category.

Over the next five years, I want to do a better job of highlighting people in our community that have had success and are looking to help others as well. The more we help, the more we get. Simple as that.

What do you have that keeps you going? What’s the purpose of it all? What do you look forward to? These can all be solved via a quest or a long term goal that you’re slowly plugging away on.

My bucket list is a quest. My golf pursuits are a quest. Even my goals at the beginning of each year is a quest. Without those, I’d lack direction and that sense of accomplishment you get when you hit a big milestone.

Something Chris told me that I think is especially important is that “quests are personal”. It doesn’t matter if no one else understands it or gets it. You don’t do it for them, you do it for you.

Every few months I’ll see a blog post from someone discuss the idea about how you need to spend your time doing “real work” and that email is just “busy work”. Hell, at some point over the years I’ve probably said the same thing.

But what I’ve learned? Email is probably the most important kind of “real work” there is.

That’s how I build connections and relationships beyond a reader and blogger relationship. When someone emails me and I respond then it becomes a person to person conversation. No one is better than anyone else, and often people are surprised when I take the time to respond to their emails. Sure some might fall through the cracks, but I always try and give a thoughtful response to reader emails, because I want to build that relationship.

To be honest, most of my product sales come from people who I’ve emailed back and forth with. And whether they buy something or not, I genuinely like connecting, hearing stories, and seeing the transitions.

So next time someone tells you email isn’t real work, just keep this post in mind. It’s much more valuable than you think.

Now that I’ve bought a house, I’ve gotten the question a lot “so are you going to stop traveling?”

The answer: absolutely not. Sure for a couple months, I may have been a little more stagnant while I get settled in, but I think adventure is one of the best aspects of life, and I go crazy if I don’t get out and experience something new on a regular basis.

Also, while travel can be a big international adventure, it doesn’t have to be. You can have adventures in your hometown, or even in your house. I look at the word adventure and think of doing something active and new. So whether that’s exploring a part of your own city you’ve never seen, trying an exotic restaurant, or flying across the world, adventures on a regular basis help to remind you that there’s a reason you work hard – it’s so you can do more cool stuff 🙂

When I was first starting out, I wanted to spend all my time with other entrepreneurs and like-minded people. Doing that helped me change my mindset a bit, get invaluable feedback and advice, and focus on my business early on when it needed it most.

However, now that I’m five years in and have a little perspective, I realize the importance of spending time with people who aren’t entrepreneurs. I still spend a ton of time with college and childhood friends who could care less about the work I do – and that’s refreshing. It gives you the ability to shut off work for awhile. When I hang out with my entrepreneurial friends you’re always talking about work in some capacity or another, which is great, but there needs to be a balance.

I appreciate being able to go on a golf trip with my college friends and not even think about work for a couple of days. It just makes me that much more excited to get back to it, and helps keep me grounded in the process.

A Final Thank You

There’s not a day that goes by where I take for granted the position I’m in and the lifestyle I have.

Also a special thank you to Tate, who has to put up with me on a daily basis 🙂

I can only hope the next five years are as much of a fulfilling adventure as the past five have been. Somehow I have a feeling I don’t have much to worry about. 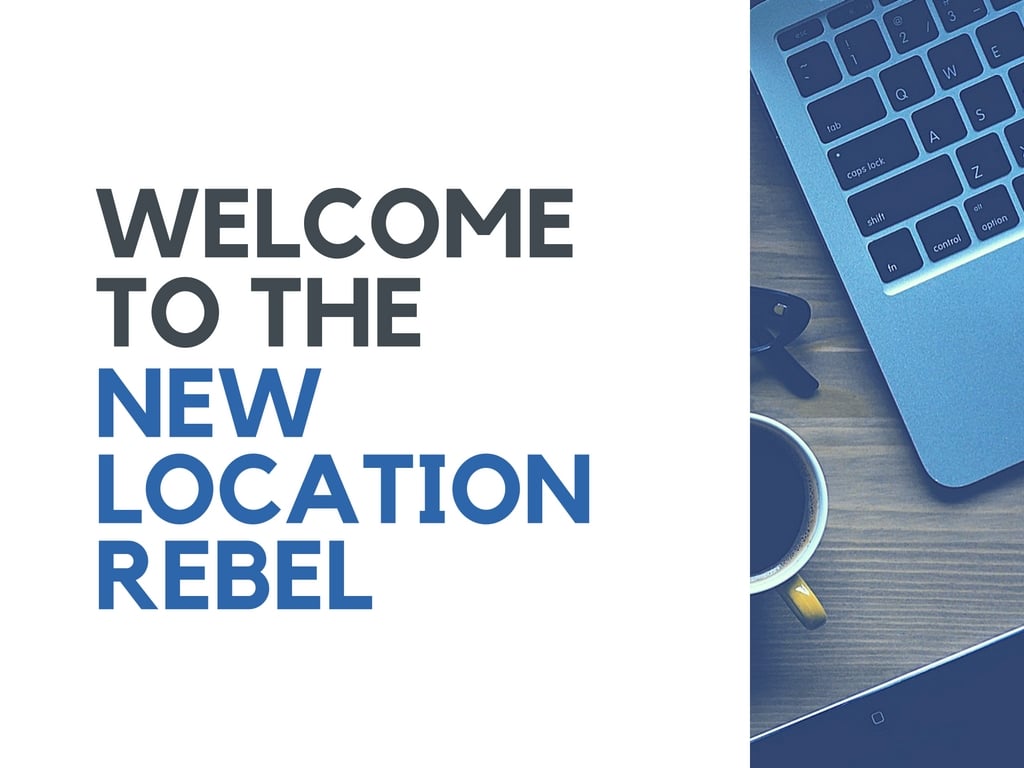 Welcome to the New Location Rebel!

Wondering what happened to Location 180? Don't worry, it's still here, just under the name Location Rebel. 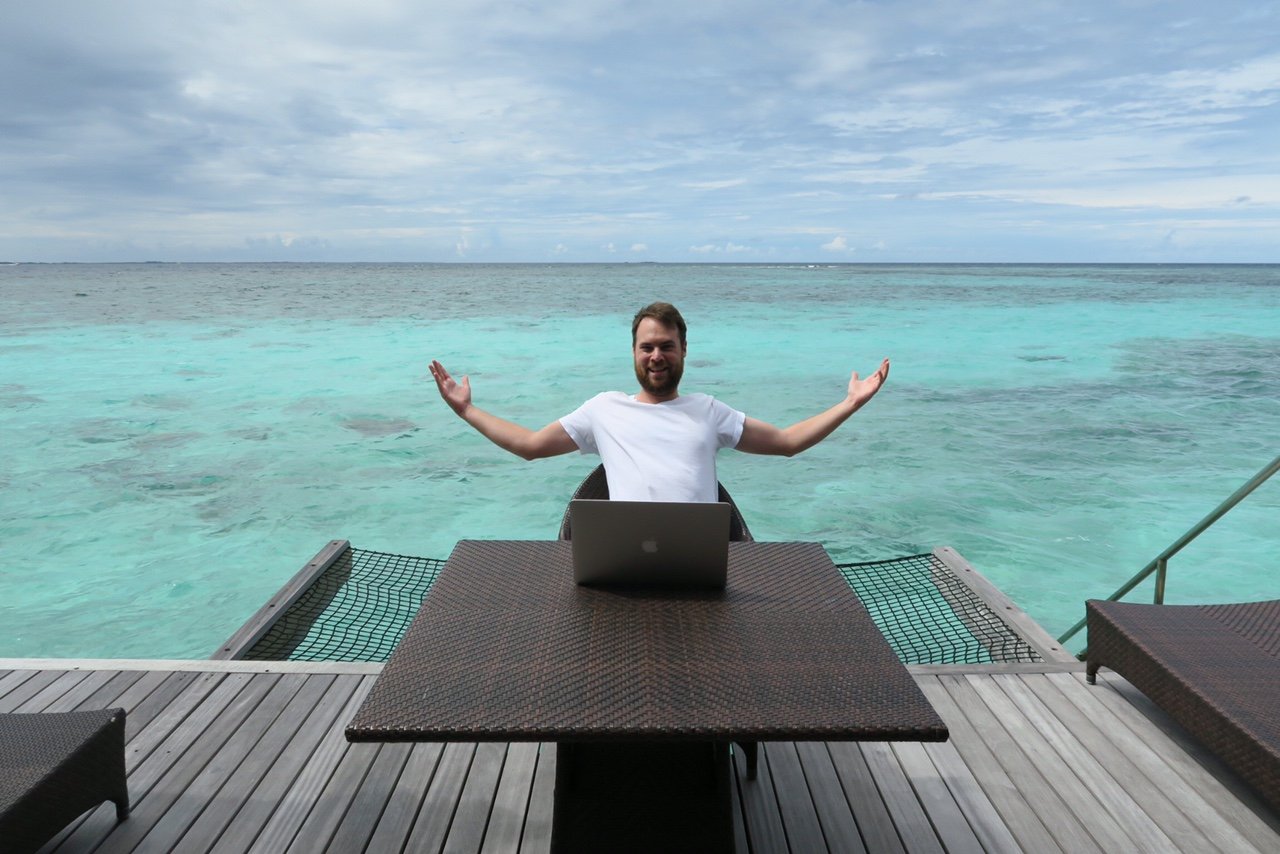 I write about a lot of things at Location 180, but not a ton about who I am and what I think. Here are 26 things you probably never knew about Sean Ogle 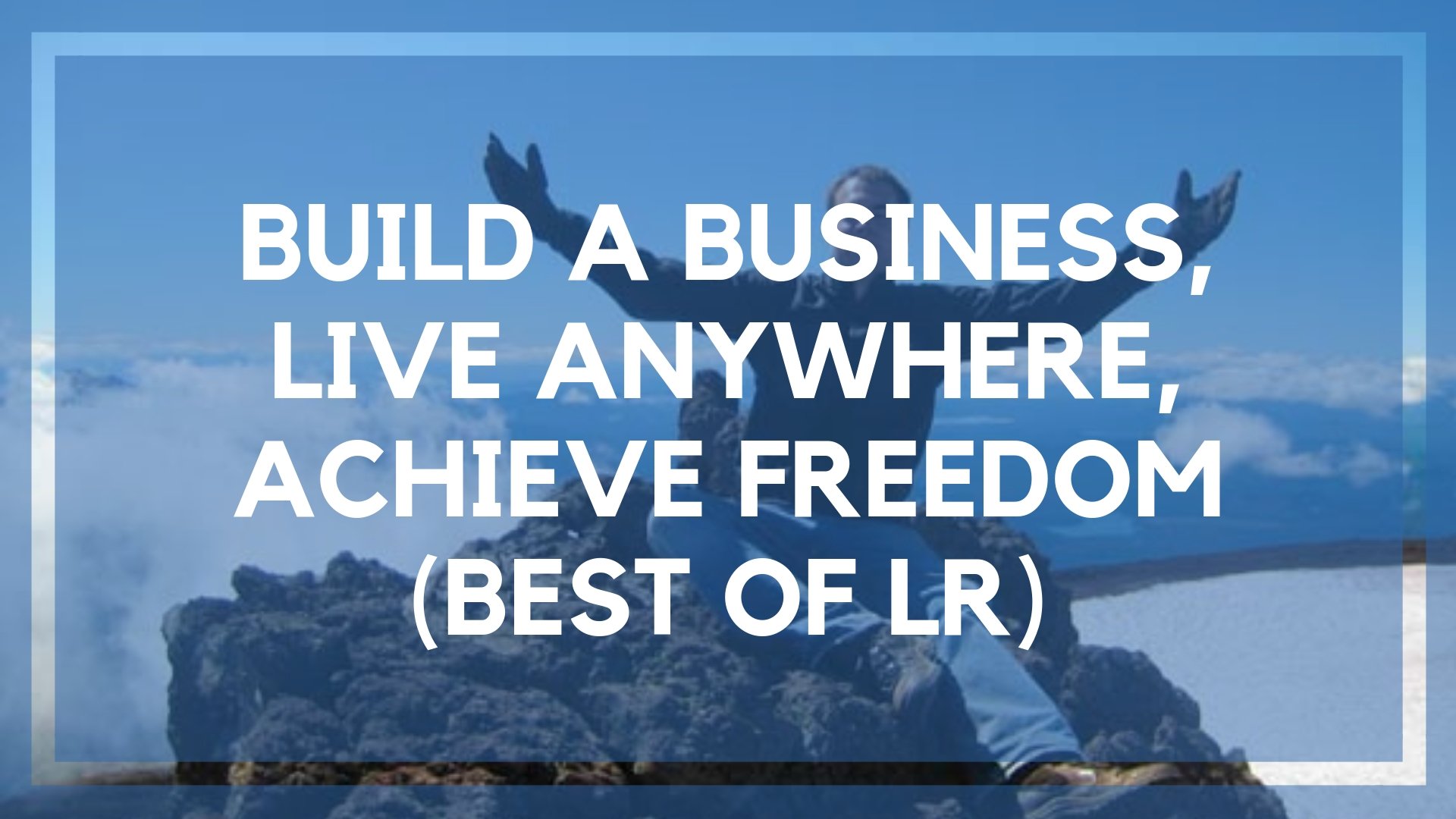 Ever wanted to build a business that allowed you to live anywhere? These posts from Location 180 will get you going in the right direction.