Am I Arrogant For Pursuing A Different Path?

Well it has been a very busy March for me, but you wouldn’t know it based on the fact it has been nearly two weeks since you have seen anything from me on Location 180!  This past week I was back down south in Krabi to spend time with my sister Courtney and her boyfriend Poul, and internet there was a bit lacking to say the least.

I did however get a chance to shoot a quick video, that sadly was cut off half way through, but I figured I would post it anyway to give you a bit of an idea of what my week was like.  If you are reading this in a reader and can’t see the video, please click on the show original item link.

It isn’t very often that I receive a negative comment here at Location 180, but after one of my last posts, I got one.  In some ways I’m surprised I haven’t seen more like this during the time I’ve been writing, but I felt like the thoughts were worth mentioning.

A reader essentially suggested that I was a bit arrogant for saying some of the things I said in the post.

Naïve perhaps, but arrogant? I don’t see that.  However, frankly, I think neither are the case.

His argument was that it is a bit unrealistic to suggest that it is easy to quit your job without significant consequences and perhaps someone who is a little farther down the line in life has far more concerns and obligations.  Things such as health insurance, a college fund for the kids, and a retirement fund for themselves.

While I think those are all valid things, I don’t think it is arrogant of myself to conclude that there is a better way.  Those are all things that go a long with the traditional thought of how life should play out.  While I do believe there is validity in each of the points he mentioned, and frankly, even in my current state, I’m preparing for some of those later-on-in-life events, you can’t hold it against me that I figured out another way of doing things early on in my life; or at least decided to make an attempt to do things another way.

David Walsh, made an excellent point in the comments where he related the idea to smoking.

“If I smoke for 20 years and realize it’s given me lung cancer, it doesn’t mean the 14-year-old that knows better than to smoke isn’t right. We are who we are when we learn what we learn – and we adapt accordingly.”

I feel very lucky to have realized after 2 years of working a “desk job” that it wasn’t for me.  Sure there are people out there that love that.  Is this site aimed at them? No, not really.

The entire purpose of this site is to promote change for the better. Whether that be a job, a living situation or whatever, I’m using my personal story as evidence that it can be done.

Don’t get me wrong, it isn’t easy. I’ve sacrificed a hell of a lot to get where I am now.  Material possessions (including my beloved car) have been sold off, I left a job that many would kill for, I have put many friendships and relationships on hold because I believe in something better for me.  If you are happy, and I mean truly, honestly happy in your life, then most of the things I’m talking about won’t appeal to you much.  I want to help people who feel stuck or paralyzed by the fear of uncertainty, get unstuck.

Yes, Kevin, making dramatic changes in your life sound as though it would be far more difficult than the changes I had to make.  But you just have to decide how important it is, and as you have more obligations, you will have to sacrifice more to make those changes.

Sure health insurance is important, even now I have basic coverage.  There isn’t much getting around that one, although perhaps that will change with the new health care plan.

A kids college fund is important as well, but let me tell you something, as much as I appreciate wanting to fund your kids education, they will appreciate it a hell of a lot more if they have to work for it themselves.  Not to mention the fact that if you are smart, during their high school you will make them apply for every scholarship they can.  I know people who had their entire educations paid for just because they were willing to write a bunch of essays in 9th grade when no one else was thinking about it.

Retirement, I hate that word.  Again, maybe this is naïve, but I’d rather be working towards living my ideal lifestyle now than saving up for the age of 65 to go hit the links everyday and take my annual 3 week cruise.  I’d rather do those things now, and if you have the initiative, it’s entirely possible.  By continuing to build my current businesses now, I’ll have made more than enough money to support myself in my old age, while living a lifestyle that most people only dream about. 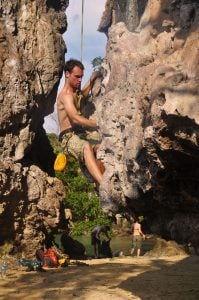 I’d say some sacrifices have been worth it…

The point here is that it doesn’t have to be a dream.  Yes sacrifices have to be made, for some bigger ones than others, but it’s possible for everyone.  It’s all about priorities.

Most are so wrapped up in the idea of comfort,that they can’t break out of that zone.  They focus too much on the potential problems rather than taking life into their own hands and making it happen.

I’m writing this from a sleeper train on my way down to the paradise that is Railay Beach.  In a few years, I’ll fly, but sacrifices have to be made.  Sacrifice I have, and will continue to do, in order to achieve my end goal of living my life to the fullest, while building a successful business in the process.

Kevin, I don’t need separate posts to tell you my 2, 5, 10, 20, 30 whatever year plan.  Because with the exception of the potential for kids and a family amongst a few other things, the goal is the same:

Build a business that support will myself, while enabling the freedom of time;  the time to do whatever I want-whenever I want.

The other night I was talking to someone about what my worst case scenario is.  What if the businesses don’t work, the blog dies, and I run out of money?  Well…then I spent a year having the time of my life in Southeast Asia, and then I’ve got to regroup and try something else.  Doesn’t sound like such a terrible thing to me.  Not to mention the fact, I don’t see that happening.  Between all I’ve learned and all the people I’ve met, there will always be opportunity.  And that goes for anyone who is looking for it.

Opportunity is everywhere, you just have to willing to act when it knocks.