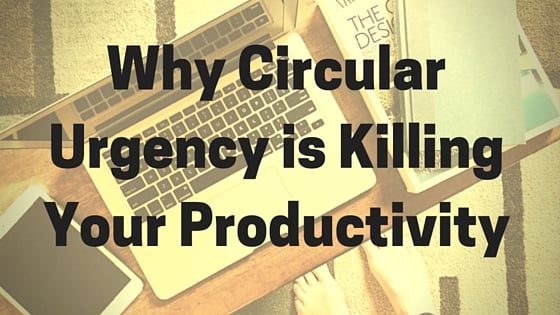 For the past year I’ve been on a relentless pursuit to analyze my productivity.

I talk to a lot of people in typical day jobs who are beginning to pursue entrepreneurship – and often I see them have a grass is greener mentality.

All of those things can be true.

But take it from someone who has battled with the reality of remote work and self-employment for nearly 7 years – it’s not always that easy.

I’ve discovered some things that have worked really well for me this past year.

And in doing that I’ve also found a pattern that seems to be at the heart of many of my procrastination tendencies.

I call it the Circular Urgency Dilemma, and my guess is it’s something you’ve experienced as well, regardless of whether you have a job, own a business, or are a student.

Usually it’s the urgent tasks that require the least amount of thinking.

It takes much less energy to respond to reader emails than it does to create an elaborate sales funnel. Yet, all too often we get in the habit of doing the urgent (and easy) things first, leaving no energy left for the difficult, yet important “business growth” tasks.

This has been the last two years of my life.

It’s a great recipe for maintaining.

And don’t get me wrong, I’m fortunate that I’m maintaining my business in a good spot. Helping lots of people, making a good amount of money, having lots of flexibility with everything I do.

But up until this year I’ve found myself saying I was going to do a lot of things, but never getting around to actually doing them.

When there are no actual deadlines, it’s easy to push things back, continue focusing on what’s urgent, feeling productive in the process, and then realizing that the product you’re halfway through creating has been sitting in that state for months (if not more).

So how do you solve this circular urgency dilemma?

How do you retrain yourself to:

The solution doesn’t solely  rest in more productivity tips. Those can help, but to break out of this circular habit, it requires a change in mindset more than the latest new tactic.

Are You Really Being Productive?

On a scale of 1-10 how productive do you feel on a daily basis?

Now on that same scale, being completely honest with your self how productive are you actually?

It wasn’t until I started facing this issue head on and being honest with myself, that I could actually go through the process of making positive changes.

So step one is just realizing circular urgency is an issue for you.

What are the tasks you naturally consider to be urgent?

For me it’s email, 100%. I usually spend at least half of my creative, productive time responding to emails.

Yes, they can be important. And I’ve made it really clear that my highest priority is serving my readers and community members – so I spend more time than the average person on email.

But 90% of those messages? They don’t need to be answered immediately. I’ve had to retrain myself to focus on email at set times, rather than dive in and spend all morning working on it.

For the past few months, I’ve been working on all of the important stuff and placing less emphasis on the things that make me feel like I’m getting shit done, but really just drain my willpower.

Because of this shift:

At this time last year, none of this was done. It was stuff I constantly talked about, but never made progress on.

Understand the Why Behind Your Work

This is something that’s been talked about ad nauseam in the entrepreneurial space, but understanding the true reasons why you’re doing the work you’re doing is important.

I wouldn’t say that I lost sight of my why, but I did keep it from being at the forefront of my mind for a little while – which led to maintaining rather than pushing things forward.

Read the book Start with Why by Simon Sinek for more help with this.

Too much work for you? Sign up on Blinkist and read it in 15 minutes.

Once You Have the Right Mindset, Explore Tactics

I said the key to defeating this issue isn’t in productivity tactics, but in mindset.

This is true, but once you’re in the right mindset and truly prepared to make changes, it’s important to approach your work in a way that is most productive for you.

Last month I wrote a post about the things that have specifically worked for me, as I battle my ADD and procrastination habits. Check it out, as sometimes all it takes is one new idea to make a world of difference.

I hope this post served as an opportunity to analyze your own habits, and possibly shine the light on something you may not have consciously been aware of in your own life. I’ve been following this negative pattern for years, but only recently focused on exactly what I was doing, and why this is – and it’s helped me stop maintaining and start creating.