After 15 or 20 minutes of nothing happening I heard that unmistakable “tick, tick, tick” that could only come from rapid gunfire.

Without having any clue what was really happening, I dove behind car only to hear the window get shot out right above me.

Wait, no context there? Maybe we should back up.

In 2010 I moved to Bangkok to build a business, and have an adventure.

I got both of those things, but some of the adventures I had, well, they weren’t exactly what I had in mind.

You see shortly after arriving in the city, all of Thailand got caught up in a giant political battle.

The short version is, there are two political parties in the country: the Red Shirts (rural, generally not as well off), and the Yellow Shirts (urban, with money).

The yellow shirts were the current ruling party and a couple years prior they had over thrown the Prime Minister at the time (Thaksin Shinawatra) who was a Red Shirt leader.

Thaksin was none to happy about this.

So from behind the scenes he organized a massive protest, paying Red Shirts from all over the country to descend upon Bangkok to protest – occasionally holding massive demonstrations with tens of thousands of people.

This post does a pretty good job of outlining the basics of Thai politics.

At first it was a jovial vibe with lots of dancing and shouting – but there was never any sign of violence. I accidently stumbled into one of these massive demonstrations, and happened to be wearing a red shirt. Never have I ever gotten so much attention in a foreign country before.

After a couple months of this happening, things started going downhill.  The camp of protestors in the Silom district of  Bangkok, was continuing to grow, and they had called in for thousands more protestors to arrive during this one weekend.

That’s when shit got real.

You see one of the main arteries going into the financial district of Bangkok from outside the city just happened to be a block away from my apartment.

I went out for lunch that Friday afternoon and heard a couple gunshots.

Ah, T.I.T.! (“This is Thailand”) – I told myself. This was a common saying for when something weird happened that you wouldn’t see in the States.

Then I saw the soliders walking down my street. There was an army base nearby, so it wasn’t a totally unusually occurrence.

45 minutes later, my buddy Cody and I were finishing up lunch, and decided to walk out to the main street to see what was going on.

We were met with a few hundred Red Shirt protesters that had been ordered to take off their red shirts so that they would more easily blend in.

The Thai military was barricading the main street heading into the financial district and standing there looking pretty scary with their guns ready.

It was around this time my naive American ass started to take some pictures, and didn’t really expect anything to happen.

Of course, I also didn’t expect a protestor to take a baseball sized rock and hurl it directly at a solider.

We dove behind a car just in time to hear a window get blown out.

When there was a lull in the shooting we then scurried around the block and back to safety.

This was the first time during the entire protest I actually felt like “hey, maybe this is a place you shouldn’t be right now.”

Well that, and the time I got tear gassed. But we’ll save that story for another Friday post.

The result of that gunfire wasn’t pretty.

That weekend ended up being one of the most surreal as my life, as that intersection became the most contested battle ground in a fight that was escalating by the day.

I went to sleep that night to constant gunfire, and the occasional grenade going off outside my building. I could see the flashes of light from the grenades outside my balcony.

They went on to build smoke barricades with old tires the next day and the fighting continued. 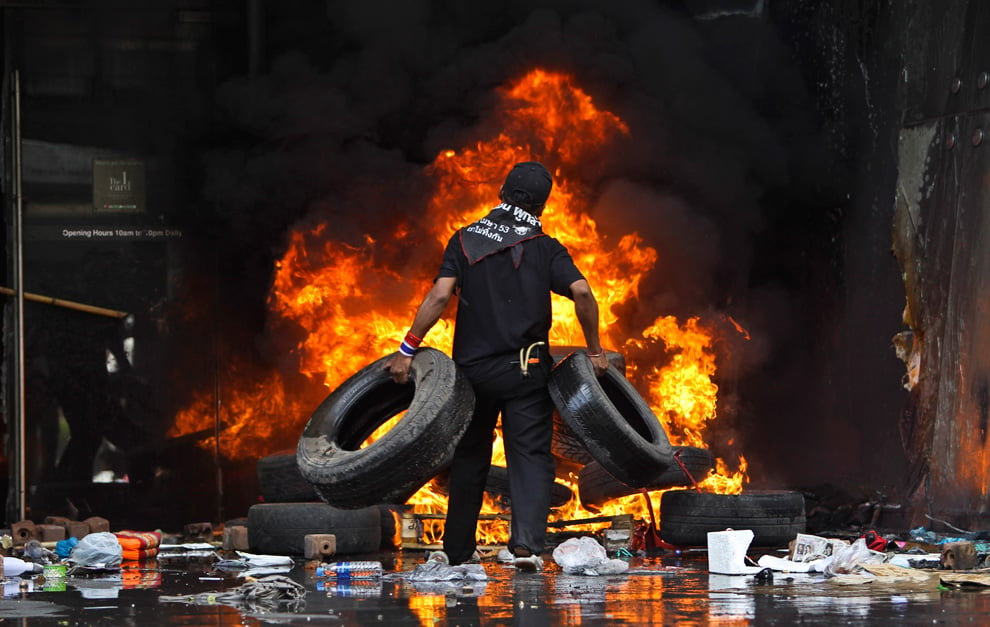 Photo from “The Big Picture”

On Sunday I was able to flee the neighborhood during a break in the firing and head to my friend Derek and Clay’s apartment across town. And that sets the scene for this post.

Moral of the story? If a country is in a raging civil war of sorts, and you don’t belong? You should probably consider having your adventure someplace else.

What’s the craziest thing that’s ever happened to you while traveling?