I’ve got a confession to make:

Throughout the last month I’ve done very little work for this blog.

It’s true, up until this week I’ve been in full on travel mode.  I’d never intended for the trip to turn out that way.  I was thinking 3-4 spots max, with one week in each location.

That’s plenty of time for me to get into a routine, and carve out some time during each day to get stuff done.

I had a group of friends that were going to be traveling to some places that I’d always wanted to go (Saigon, Angkor Wat) and then culminating in my favorite city on Earth: Bangkok. 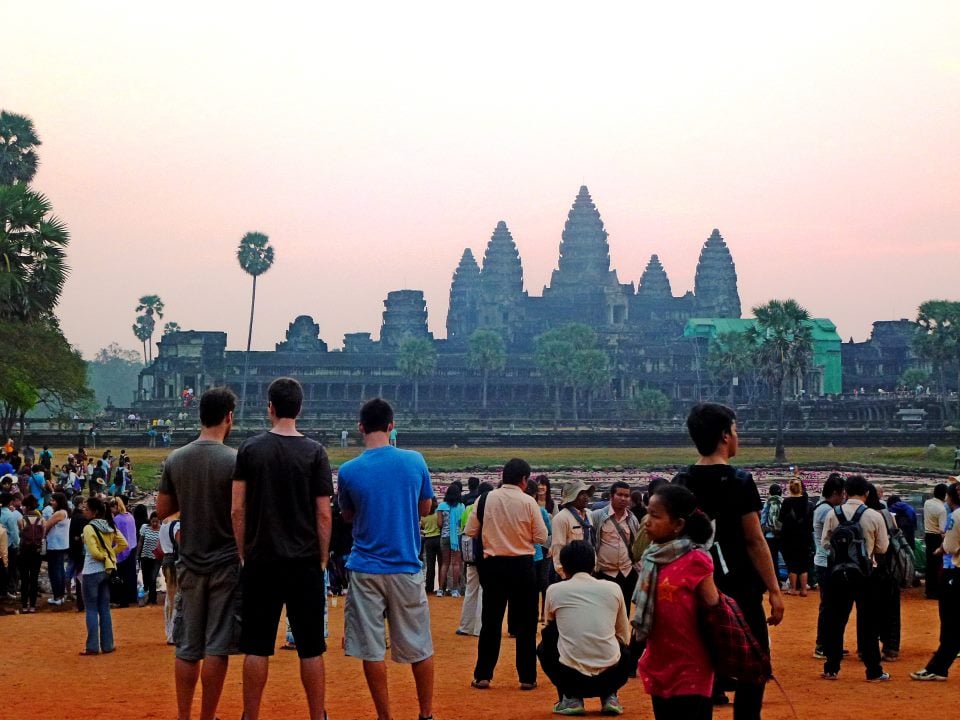 So much for slow and steady.

I decided to tag along for a variety of reasons, but mostly because the stars aligned, I’d get to cross off a few new spots on my list, it sounded like a ton of fun – which it was.

Bad news, is when you’re on the road every other day and have traveled specifically to see the sights, it doesn’t leave much time to, you know, be productive.

Luckily, I was confident that if I took off for awhile and had limited access to wifi, I could still bring in enough income for the month to support the trip.

How did I do it? By focusing on three critical components while I was building my business to ensure that when an opportunity like this presented itself, I wouldn’t have to hesitate and could jump at the chance to go travel.

Before we get into the meat and potatoes of this post, I should make it clear that there are all kinds of ways to build a business that brings in “passive income”.  I hate that term, but let’s call a spade a spade for this illustration.  Many of the ways you can do it are extremely shady and aren’t things I do or advocate.

No, I’ll be sharing the three most critical aspects of my business where people are the most important component and the last thing I’d ever want to do is screw someone over.

Now onto our three components.

There’s one thing I try and give total priority when I’m on the road.  No it’s not a blog posting schedule (obviously), nor is it an increased emphasis on affiliate links or other ways of making money.

It’s relationship cultivation.  I’ve hardly done any creative work over the last month.  I have all kinds of projects that I essentially put on hold to go and actually live life a little bit – but I always did my best to respond to emails when people sent them to me.

I usually get about 10-20 emails a day from new blog readers that are writing to tell me about their story, tell me how excited they are they found the site, or simply wanting to say hi.

That’s where I devote my time.  I do my very best to respond to every email I receive that was sent by someone who actually put some thought into the message.

Why is this so important?

Because the only way I can make “passive income” is when people buy something. Why would anyone buy something from me if I can’t even respond to a simple email?

Let’s take this a step further though and really hammer home the importance of this.

If you have a relationship with your customers, they also give you more leeway.

When people inside Location Rebel know I’m on the road, and send an email asking a question they are much more willing to cut me some slack then if there was no previous relationship.

For me this takes SO much stress off my shoulders.  I’m not saying it gives me a reason to get complacent, but it does give me the ability to enjoy my time away from my computer without having to stress about every little thing going wrong.

That being siad, it also doesn’t hurt that I have the most badass relationship manager ever in Liz to help manage the forums and other member inquiries.

Bottom line, if you cultivate your relationships not only will you continue to see money come in while you’re away from you computer, you’re existing customers will be even happier in the process.

I was in the middle of nowhere – Yangshuo, China to be exact.  My time was spent mountain biking, hiking, and basically doing anything but sitting in front of my computer.

Then I received an email from my business partner with the subject: “WTF?”

What had happened was the Google Penguin update went live, and one of my bigger sources of income had been cut down by 80% overnight.  There were a couple hours of freakout, especially considering internet was difficult to come by there, but then I realized that this is exactly what I knew would happen at some point and that I’d prepared for.

At any given time I have no less than a dozen different income streams.  Some very minor and others not so much, but if one of them gets cut off I know that I’m still in good shape.

This is what I call Job Security 2.0.

If I was on vacation from a day job and my boss sent me an email saying I was gone – then it would have been a much different story.

Over time, without proper maintenance ALL passive income streams will dwindle or disappear altogether.  It’s just the way it works.  So if you want to build a sustainable business over the long term, and not some flash-in-the-pan-get-rich-quick scheme, then you’ll need to diversify and expand your income streams as quickly as it makes sense.

Some ways to do this:

The more you diversify the greater your chance of earning a substantial passive income regardless of how much time and effort you’re putting into the business.

DISCLAIMER: This is the big “but”.  This all takes time to setup and won’t happen over night – so don’t expect it to. Start working on it now to prepare for the future. It’s taken me over three years to get where I’m at now, and I still have a long ways to go.

I almost made #3 “Putting Effort in on the Front End”, which is totally true, but I think straight up giving a shit, encompasses and trumps that.

So many people just don’t care. They don’t care about value, people, building a real business…all they care about is themselves and making money by any means necessary.

It’s kind of ironic how really, truly caring about your business is what gives you the ability to forget about it for short periods of time while you travel or have other types of adventures.

If you really care about the people you’re trying to help, in the long term good things will happen – I promise.  Why? Because that sets you apart from the vast majority of people who simply don’t care.

So think about this from square one.  Are you starting your passive income business simply to make money? Or are you doing it because you really want to make a difference in the lives of others…and make some money in the process? There’s a big difference.

There’s nothing wrong with wanting to make money, selling products or services, or wanting to do it all while chilling on a beach.  That doesn’t make you a bad person, and it’s a fantastic dream to have that millions of people share.

But you have to care. You have to want to do it in a way that benefits more than just you.

So think about that first.

Ask yourself: “How can I create something that makes a difference in one person’s life?”

Then worry about the money, because when done correctly, believe me, it will come.