I know you’re sick of hearing about golf – don’t worry this isn’t a post about that.

Most people talk a lot.

“Next year I’m going to take a trip to Thailand.”

“I’m going to quit my job in 5 years once I’m financially stable. ”

“I’ll go to Rio for carnival one day, but it’s not the right time”

Early last month I announced I was going to take a golf road trip.  I’m currently trying to play all top 100 and top 100 public golf courses in the United States, so what better way to start crossing them off than to take a trip and play as many of them as possible?

Last week I returned from a 3 week trip, and for most of that I was doing nothing but playing the best golf courses in the United States.

I’m elated, exhausted, and ready to start getting some real work done for the first time this month.

Before I put this trip to rest though I wanted to share some of the most important things I learned about myself, life, and business.

This trip had pretty big implications for all of those things, and helped to make some other things I’ve learned on past trips a little more concrete.

I’m sharing them in hopes that it will make you think about some aspects of your next big trip or adventure that you may otherwise have not considered.

And then, I promise, you won’t be hearing about golf for a long time 🙂

For the last 3 weeks I’ve eaten like crap. Don’t get me wrong, I’ve had some fantastic meals, but when it comes to being healthy I’ve failed big time. I’ve gained 10 pounds, and since for documentation purposes most of the rounds of golf I played were with a cart, I’ve gotten relatively little exercise.

Had I planned accordingly with healthier snacks, preset times to exercise, and any kind of semblance of a diet, much of the gluttony of the trip could have probably been avoided.

There are certainly times to soak in the moments and not worry about being healthy.  But if you do that for too long really bad things happen.  Next time you’re taking any kind of extended trip or adventure, put thought into the healthy habits you want to exercise while on the road. Both your brain and gut will thank you.

2) A Little Bit of Planning Goes a Long Way

When I first decided to do this it seemed pretty simple.  Hop on a plane, rent a car, and then go play a bunch of golf.

I quickly learned that to play all of the courses I wanted it was going to take a little bit more planning than that.

There are plenty of situations when planning isn’t a good thing.  However if you’re going somewhere for a set period of time, and have specific things you want to do, the more you can plan ahead, the more you’ll do.

In this case planning ahead meant I got to play almost all of the courses I wanted, in many cases for cheap or free, because I took the time to put together a marketing pitch for each course.

Were it not for that, my experience wouldn’t have been nearly as fulfilling and much more expensive.

There are times when you should say yes more.

There are times when you should say no more.

But generally speaking when you’re traveling and you’re given the option to do or do not – you should almost always go with the former.  There was one day where I was exhausted both physically and mentally and we were going to skip the planned course for the day and just relax.

At the last minute we decided to go and were treated with one of the most fun days of the trip. We had the course entirely to ourselves and it was one of the bigger surprises of the trip. It was also in the absolute middle of nowhere – so if I didn’t play it then, chances are I never would.

No one in sight: If you’re doing anything that requires working from the road, technical documentation or anything else like that, make sure you test everything beforehand.

Before I left for the trip, I simply assumed everything that had always worked in the past was going to work again. Big mistake.

The single most important component of the trip was the photos.

I’ve got a pretty good system for editing golf photos.  This is great until the plugin I use for editing decides to slow down my entire computer and take about 15 minutes to process a SINGLE PHOTO.

I was hoping to do some editing on the road and post more photos, but the plugin was so bad, that I all but gave up at the end.

This one photo of Blackwolf Run took 15 minutes to load and process: 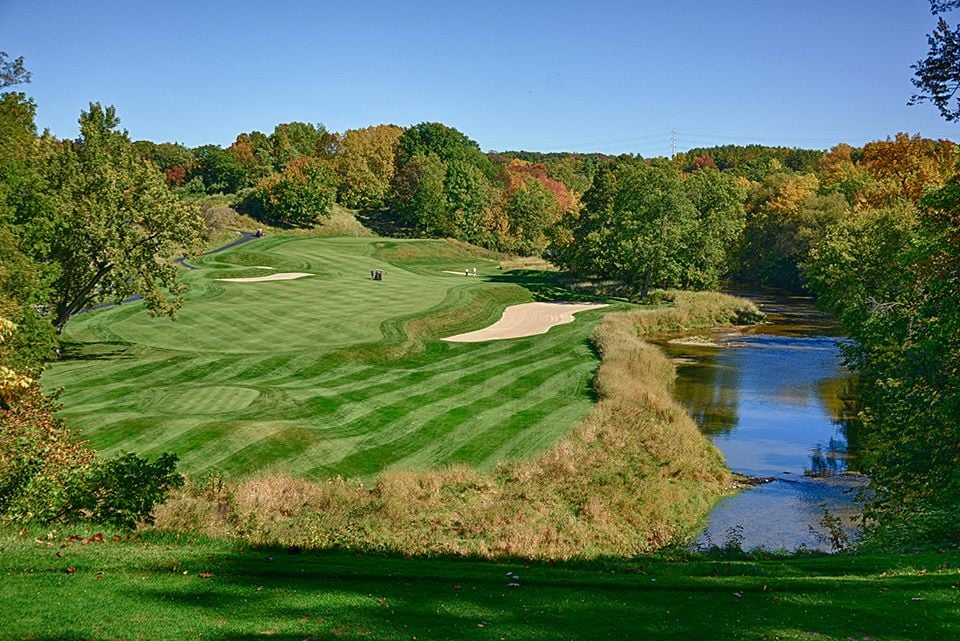 It took about 3 days for me to realize that my ambitious plan to do all of this was a little too ambitious.  It was the 5th day when I got to the point where I just couldn’t keep up with everything. I’ll be posting the video blogs over the course of the next few weeks, and the photo editing will take place once I can troubleshoot the plugin, but from the beginning, my schedule was more intense than it should have been.

After 36 holes of golf and an hour drive to the next course, there isn’t a whole lot of time and energy to do much of anything. I didn’t anticipate that, although I should have.

When you’re on your next adventure be realistic about what you need to accomplish and plan accordingly.

In a way I feel like a stranger to my business. I’ve (barely) been able to maintain things, but there hasn’t been much in the way of growth or creative work over the last 3 weeks.

If I were doing this again I’d schedule more time to actually get stuff done.  When you’re staying in a new place every night it’s difficult to make time for this, but even if it means spending a little bit more on a hotel for a few extra nights and scheduling 4 hours blocks, or even whole days for work, it will do wonders for your stress and anxiety levels.

I’ve said it before and I’ll say it again: adventure is my favorite word in the dictionary.  If you aren’t dong something interesting with your life, then what the hell are you doing?  Even if you’re broke, work 70 hours a week, and can’t fly off to wherever you want that doesn’t mean you can’t have adventures on a regular basis.

Go on an urban hike in your city. Walk up and talk to a stranger. Play an instrument in public.

There’s an unlimited number of out of the ordinary adventures you can have on a daily basis.  This trip reminded me of that. Me on the 11th hole at Arcadia Bluffs

I used to be really good about following up. I read Never Eat Alone right after I graduated and became a networking machine. For some reason lately, I’ve gotten lazy with it. Instead of immediately putting all business cards into my contacts and sending a follow up email, I put them in my pocket and then forget about them – even if it’s someone I’m genuinely interested in keeping in touch with.

I did the same thing on this trip.  Really interesting people I met along the way got relegated to a scattered assortment of business cards that I’m struggling to piece back together so I can send follow up emails much too late.

I got the chance to play a very exclusive private course in Chicago, and because I waited too long to follow up, they filled the spot with someone else.

Get good at following up quickly and the connections you make will make it well worth the extra organization.

I originally planned this to be a great marketing trip to help boost the profile on Breaking Eighty.  I started planning a couple months before, talked about it more than I probably should have, and really made a point to try and spread the word.

The result? Most people didn’t care.

In fact there were at least a few people who reacted very negatively saying stuff like this:

“Who is paying your way for this??? I can only afford to play 1 or 2 nine hole rounds a month at my local muni. This is so unreal and totally out of touch with the masses. The ones who work bleed sweat so wealthy people can ride us even more into the ground.”

One of the best things about my friend Dan joining me for the Michigan portion of my trip was that he and I share one very important thing in common: we both believe in not taking things for granted and always being aware that “life doesnt suck.”

We both some pretty bad rounds, but whenever someone should get a little more pissed off than they should, the other would simply say “dude, life doesnt suck.” And then we’d look around and realize we were doing something that most people would kill to do.  It helps put things in perspective.  I promise, if you adopt the “life doesnt suck” mindset, you’ll appreciate your life more and genuinely be a happier person. 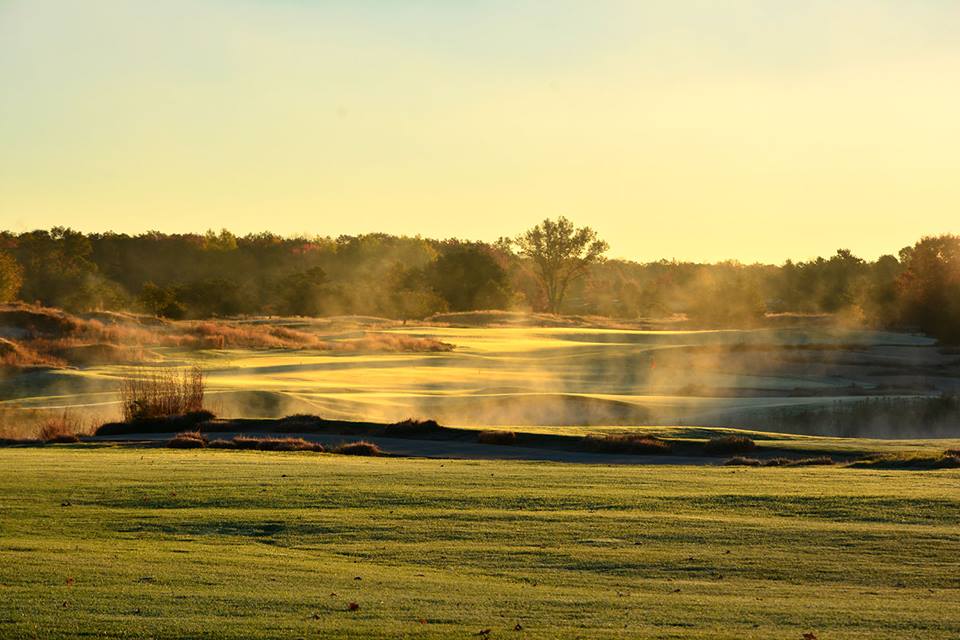 For those who are interested, next week I’ll be posting a full recap post of the trip with more photos and details over on Breaking Eighty.  You won’t hear about golf for a long time on Location 180 🙂

And in case you are wondering, my favorite course was Arcadia Bluffs.