A False Sense of Credibility

There are a lot of people on the internet these days, who are saying a lot of things.  Often times, the tough part can be figuring out who to pay attention to.

We live in a world where everyone can have a voice.  Many of those voices speak louder than others, and just because they’re speaking up, it doesn’t necessarily mean they’re the ones you should be listening to.

I’d like to add a note that this post is directed at no one in particular, it’s just based off of random comments I’ve seen and an interesting discussion that developed in my last post “Most People Hate Location Independence”.

There are thousands of bloggers out there who think they have what it takes to make a living telling other people how to improve their lives, make money, or do any combination of other things.

It can be hard not to wonder how many of those people out there are actually living the things they’re preaching – and does it even matter if they are?

In a recent post by Ashley Ambirge of the Middle Finger Project, a commenter called out the fact that not everyone should attempt to be an authority, because the fact of the matter is not everyone is: 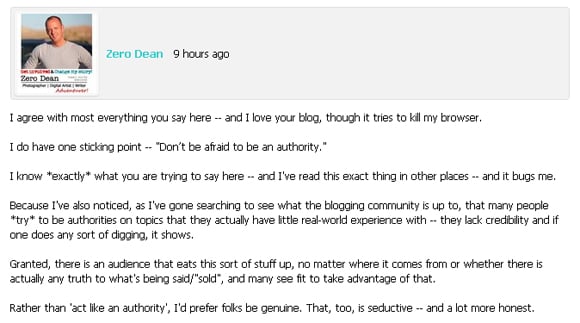 I’ve seen a lot of questions and concerns from people that are similar to this.  So as a blogger and community, how do you go about it?  Do you be completely straight up and tell people that you’re not an authoritative source?  Do you fake it til’ you make it? What’s making it? What’s considered deceit and what’s legit?

You don’t have to be an authority to be a successful blogger, and if you keep at it long enough, you will become an expert –  at which point, you’ll be able to leverage the respect and credibility you’ve earned along the way through being straight up with people.

A Shift Towards Monetization

As the location independent/lifestyle design (for lack of better terms) blog movement continues to grow and roll on, many bloggers (myself included) are starting to figure out ways that they can make all of this hard work pay off monetarily.  Membership sites, ebooks, consulting, advertisements etc. are all different ways people make money.

It’s only natural right?  There were a ton of blogs that started in 2009 and early 2010 with bloggers putting in countless hours to build a brand and a voice.  Being compensated for that is a natural progression – and is completely reasonable.

It’s a completely valid question and after some comments I received last week, I’ve been thinking a lot about the topic of credibility.

Many of you probably read the rather harsh words that Kevin left in the comments last week, but by the end of the conversation he brought up a question that’s actually pretty interesting:

“Why am I credible?”

Sure I quit my job and traveled for a few months, but why does that give me the entitlement to tell you how to do anything?

I’m admittedly pretty deliberate about what I say in regards to the specific work I do and the money I make.  Much more about all of that stuff will be revealed in due time, but until then there are probably a number of people who don’t view me as a credible source, and therefore disregard what I have to say.

And I’m totally cool with that.

For one, the majority of this blog isn’t necessarily me telling you what to do, but rather what I’ve done and how it’s worked out for me.

Also, something I’ve realized is that you don’t have to be an authority regarding everything you talk about.

I believe I’ve become an authority when it comes to overcoming fears and striving to work towards a life that makes you happy.

I have 172 other blog posts to back that up.

So I created a product around overcoming fear and uncertainty because I believe I honestly have a lot to offer when it comes to that topic.

Notice how the product isn’t called “Overcome Uncertainty and Become a Millionaire”.

I may talk about making money and creating a location independent business – but I have yet to establish myself as an authority on that subject.  So I don’t attempt charge anything for that information. Not to say I couldn’t, but it’s just how I’ve decided to go about things.

When you all have a more clear sense I make my money and what my businesses are – the question of credibility in that regard should be much less of an issue.

This is something to consider when you’re putting your message out into the world.  If you’re trying to become an authority, what niche are you doing it for? Would you listen to yourself if you were one of your readers?

I think that’s one the best ways to honestly assess where you’re at when it comes to your authoritative status.

If you would take advice from yourself about a given subject then create a product, give advice, and push forward with your expertise – it sounds like you know what you’re talking about!

However if you aren’t there yet, there’s a ton of value you can still provide to your readers.

Does Credibility Even Matter

There’s another school of thought related to this matter which says it doesn’t matter what someone has done, rather it matters what they know.

There are business consultants out there who have never worked in any specific industry, yet they could tell you exactly how to build your business and become successful.  Are they any less credible because they’ve never done it themselves?  Good information is good information regardless of who it comes from.

The hard part is deciphering what information is good and what’s bad.  It’s made increasingly more difficult by the fact that on the internet, everyone gets a voice.

I think there are a ton of people out there who have an incredible amount of useful information to offer.  That said, I agree with Zero Dean – I want to see more people being genuine.  In my mind, that’s a hell of a lot more powerful over the long term than trying to be something you’re not.

For you personally,  how do you decide what’s worth paying attention to and what’s just noise? Is it based entirely off perceived credibility? Entertainment value? Both? Neither? Share your thoughts!

Important Note! This Thursday Riskologist Tyler Tervooren, Minimalist Tammy Strobel, and myself will be having a bit of a meetup in Portland at the Lucky Lab on Hawthorne.  We’ll be there at 7, so come share some beers and good times!

If you enjoyed this article then you’re going to LOVE my new email series about becoming location independent – check it out over in the sidebar.  If that’s not your thing, maybe you’d prefer Twitter or Facebook instead.