10 Lessons I Learned from Casey Neistat’s Guide to Life

For the last couple years I’ve been a huge fan of Casey Neistat.

Every time I get ready to take a trip, I get really excited about vlogging, telling stories, and I turn to his videos for inspiration.

It seems like lately he’s been hitting the mainstream even more, as almost every day something he has done is popping up somewhere in my life.

If you haven’t heard of him, maybe you’ve seen this:

Recently, I came across a video one of his fans put together that I hadn’t seen. It was Called “A Guide to Life.”

It’s over half an hour long, and in the last 24 hours I’ve now watched it three times.

This is coming from the guy who has an attention span so short, that he’s never been able to sit through an entire TED talk.

All of Casey’s videos are inspiring and well done, and I’ve never seen anyone who can make a daily 8 minute vlog so entertaining.

Much of it is stuff we all know, but rarely take to heart. So to hear it from a guy who works harder than just about anyone I’ve ever seen, and has the success to prove it? I found this unbelievably motivating.

Do yourself a favor and watch the whole video, it really is that good – but in the meantime I wanted to share 10 of the things that had the greatest impact on me.

That’s a really scary place to be, because once you lose that forward momentum, it gets much tougher to get things going again.

Another way of putting it, is it’s easier to steer a moving vehicle. It’s kind of like trying to start pedaling a bike in a high gear. It’s really difficult to get the wheels turning.

But if you’re already moving to begin with, it becomes much easier.

Moral of the story? Don’t stagnate. Do something. Do anything, and adjust on the fly.

“I’m never going to get any younger, but right now I’m completely healthy, I’m full of energy, and who knows how long this will last. I doubt I’ll be feeling that when I’m 50 or 60 years old – so I want to do it, now.”

Ever since I first heard him say this, every time I’m being lazy I think to myself “it’s never going to get any easier.”

If you have big things you want to do in life, or even little things for that matter, the time to take action on them will always be right now.

When I bought a house, same thing.

If you’re not taking risks in life, you’re not living it. The less risk you take, the less fulfilling your life will be at the end of it.

Risks can be scary, but you know how many times the absolute worst case scenario has happened in my life? Zero.

He specifically talks about this as it relates to creative work.

I’ve seen so many people start blogs that are simply trying to model what has already been done in the past…like a bajillion times.

Sure there are marketing tactics or promotion strategies that could work for you – but in the end, if you don’t have something that separates yourself from what everyone else is doing? You’re going to fail.

5) You can supplement sleep with exercise

He said this in kind of a “working theory” kind of way, but I liked it, and I think there’s something to it.

The gist is, that you can supplement sleep with exercise.

So if you normally get 8 hours of sleep, you can instead sleep 6 hours and exercise the other two and feel more rested, have more energy, and generally feel better.

Rather, most of the time you’re implementing the “Tarzan Method.” 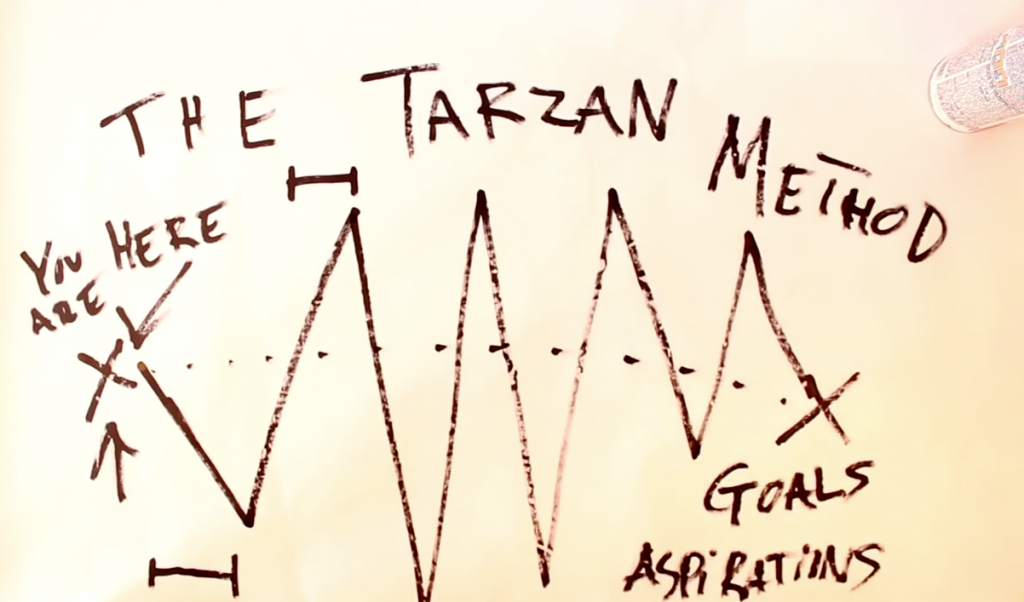 You swing from one branch in one direction to a different branch in a different direction, but the whole time you’re making incremental progress towards your end goal.

As an example, many of the people I work with or who join Location Rebel immediately want a passive income business building niche sites.

There’s no straight line to having this, and it’s generally a difficult thing to create.

By starting first with a blog, and then swinging over to another branch to learn some skills, and then to another where you start freelancing, and on and on – you’re getting closer to your end goal, but doing it by taking different semi-related steps to get you there.

7) Want to know how to get yourself out of a rut? Work.

This goes back to the concept of the moving vehicle we talked about earlier.

Feeling depressed? Going through a bad breakup? Hate your job?

Whatever the problem is, you can get out of this rut simply by working.

I can relate to this personally.

The times when I’m in a rut are usually due to the fact I haven’t been able to motivate myself to work or be productive.

When I do? I feel better.

8) Free time is the enemy of progress

Free time is the enemy of progress.

You might be sensing a theme with some of the lessons I’ve gleaned from this.

Many of them simply come back to doing the work.

By having more things to do than you have time to do them, you’ll never be bored, and always have something to drive you forward.

For some, in practice this could lead to stress, overwhelm, and ultimately not taking any action at all – but I think the concept makes sense.

Always have more stuff to do – then learn how to balance your free time appropriately. And specifically, make sure you’re spending your free time deliberately.

As an entrepreneur I will always have things I could or should be doing. Always. Learning to manage that, while still having a life outside of work is an important lesson.

9) The best way to find what you love in life, is by doing something that you hate

People have asked me in the past if I could go back and change my past, would I have skipped college and not gotten into my job in the first place?

Many expect me to say yes.

But I wouldn’t trade either of those experiences for anything.

The few years I spent at my day job, constantly dreaming of something I would enjoy more, is what motivated me early on to grow this business, and what keeps me motivated to continue building it.

If I hadn’t ever known what that unhappiness felt like, it’d be much easier to fall into the trap of comfort and routine that traditional employment so often affords.

10) Why it’s never ok to complain: there is always someone who has it worse than you do

My whole life I’ve generally been a pretty positive person.

Sure we all complain about small things from time to time, but to be honest, I live an extraordinarily blessed life.

I really have no right to complain about anything.

There will always be annoyances or frustrations, some minor, some major – but the reality is, I’ve got it better than the vast majority of people in the world.

And if you’re reading this? You probably do too.

Keep that in perspective next time you’re complaining about the traffic, the weather, or how tired you’re feeling.

Ever Wanted to Try and Get in Touch with an Influencer Like Casey?

What Are You Building Today?

I’m the kind of person that loves personal development stuff.

Even listening to the rehashed stuff I already know can motivate me a ton to get off my ass.  Casey’s stuff and this video hits the perfect balance of good general life lessons, new ideas, and entertainment that I enjoy the most.

Hopefully you got at least one pearl of wisdom from this post that you’ll be able to apply to your life and business.

What’s the one thing that hit you the most in this video? How are you going to apply it in your own life?