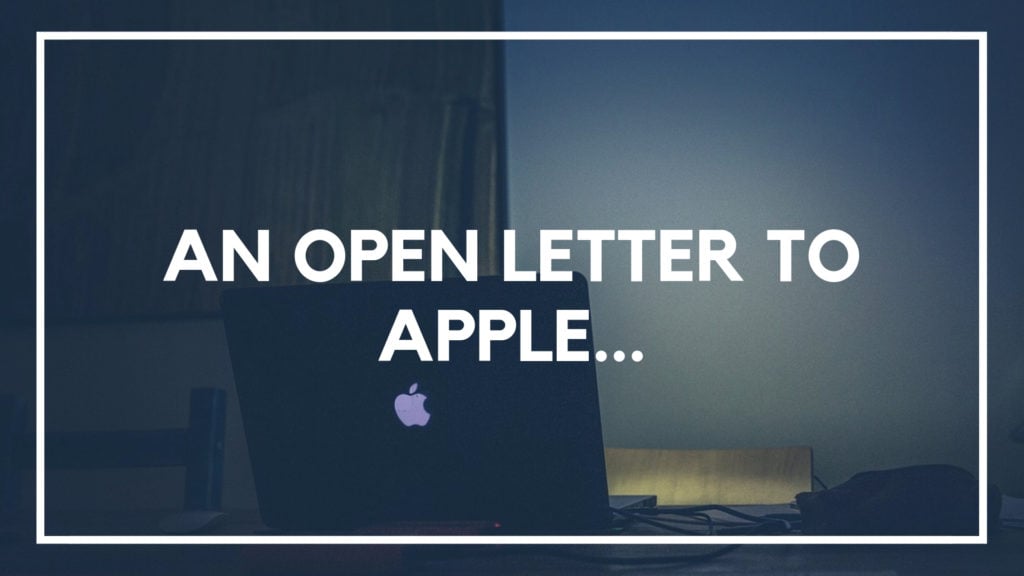 But the time has come.

I can’t take it anymore.

Macbook Pro Review: Apple, you really screwed me on this one.

For years, I was reluctant to join the cult. I was happy with my PC, my off brand MP3 players, and not being locked into everything that an Apple transition entails.

But then I did it. I went out and bought my first iPod Touch and life was never the same.

This was back in 2010 before everyone had smartphones. I can’t tell you how many bars and restaurants I took this thing to in Thailand trying to find free wifi just to check my email.

Everything about it just worked and worked well.

So naturally, I got an iPad, iPhone, Apple TV, and made the biggest jump of all with my MacBook Pro.

4 years later, I got another MacBook Pro – and I loved them both.

But a few months ago, that second one finally was on its last legs. A tiny crack had spread, and my screen was beginning to look like a spider was spinning a rainbow-colored web all across it.

It’s not difficult to justify buying a new laptop, even one that I’m dropping the better part of three grand on.

I use it for hours on end, every day, and it’s the core tool I use to make my living.

So it was settled, I was going to go buy a nearly maxed out MacBook Pro, in the sleek gunmetal grey with that new touch bar thing.

I never could have been prepared for just how bad this would be for my productivity.

And not in the “look at all these new cool features that I want to play with that are distracting me from my real work” kind of way. Rather in the “how on Earth could such an unpractical design get approved by the best design company in the world” kind of way…”

There honestly isn’t a day that goes by that I don’t want to throw myMacBookk out the window and go back to my 4 year old computer with the spidy screen.

Allow me for a second to share with you exactly why this is the worst computer Apple has ever made, and how it doesn’t deserve the label of “pro.”

For starters, I was skeptical but optimistic about what this touch bar could really do for me.

It took all of an hour for the first disaster to show itself.

It’s setup to change based on what app you’re using, which is kind of a cool idea.

For instance, there will be a timeline if you’re in Final Cut, or among other things, it will have a search bar if you’re in a web browser.

So, I’m in Chrome writing a blog post in WordPress.

On the top left of the Touch Bar is a back and forward button.

When I’m writing, your often hover with your fingers above the keyboard as you think about what you’re going to say next.

And in doing that, occasionally I’ll ever so lightly brush the browser back button.

And then my WordPress post, forum or blog comment, or whatever it is I’m working on will disappear as I return to whatever page I was on before.

I accidentally brush the back button, hit the forward button to go back to my writing, and sure enough, all my work is gone.

This happened nearly every day until I figured out how to change the Touch Bar to a more standard array of keys.

But it’s still just as bad.

Now every 10-15 minutes, as I’m writing I’ll either activate Siri, adjust the brightness on my screen, pause my music, or skip to the next song – depending on where my fat fingers happen to be hovering in that particular moment.

And the best part?

THERE’S NO WAY TO TURN THE TOUCH BAR OFF.

But that’s just the tip of the iceberg.

As a photographer and someone who does videos, having an SD card reader is hands down one of the most practical and “pro” features I need and use on a daily basis.

But to rub salt in my wounds, the SD card reader and usb 3.0 port (oh yeah, because there are ZERO standard usb ports on it) I bought, has this weird little quirk where it DISABLES MY WIFI NEARLY EVERY TIME I PLUG IT IN.

Yes, this is actually a thing.

Not only are you forcing me to use dongles for everything, but then when I submit to your mandatory dongle-ing you kill my one bridge to the outside world.

Oh well, at least I can easily plug my brand new iPhone X in to tether and charge.

Or how about that cross country flight I was just on where all I wanted to do was use my Bose Headphones on my iPhone, but I lost the stupid adapter for that?

NO TUNES FOR YOU!

And don’t even get me started on the whole butterfly keyboard thing that might be the worst feeling keyboard I’ve ever used.

But when I bought this new computer (and new phone), I never could have anticipated the frustrations that would DAILY affect my productivity in such a profoundly negative way.

The dongles, the touch bar, the keyboard, it may not seem like a big deal.

And I get it, Apple is paving the way for the future (supposedly).

But that doesn’t change the fact that I need to be productive today.

And when I’m constantly having my writing interrupted by this stupid touch bar, or when I don’t have the necessary dongle to plugin my hard drive to get photos I need, or when I can’t even use headphones to listen to music on my damn iPhone – it really feels like Apple has lost it’s way.

It used to be everything just worked.

When Steve Jobs was around, everything was simple and was geared towards creating the absolute best experience for it’s customers.

And it used to do that.

But now in a move I never thought I’d ever do, I’m considering moving off the Apple Eco-system.

Because honestly? It feels like they just don’t care.

And I suppose with a trillion dollar valuation? I guess they don’t have to.

Update: Since writing this last week, I now have a new issue in that when the volume on my speakers hits a certain point, they become all muffled and distorted. Wow.

Want help learning how to build a sustainable lifestyle business of your own? Even if you have a crappy laptop that makes your life more difficult than it should be? I can help!