For the last three years I’ve been involved with a putting on a conference in my hometown of Portland, Oregon called the World Domination Summit.

I work with a small team for most of the year to prepare for one weekend of full blown awesomeness – yes, I realized I just used the word “awesomeness”.

Year 1 was the test.  We had no clue if it could work, if people would show up, or if 8 people with next to no experience with events, could actually make this thing happen.

Year 2 was the proof. Not only did we double in size, but we stepped up everything, including giving every attendee a crisp $100 bill as an investment in them at the end of the event.

This year was the scale.  How do you keep a small event full of tight-knit community, without becoming exclusionary or clique-ish? Well that was the task we were faced with this year.

In 2013, everything was bigger, better, and scarier.

“Hey, let’s rent out the entire Portland Zoo for an opening party! Oh, and we’ll throw in an unconventional marching band, and a mechanical bull in there for good measure!” 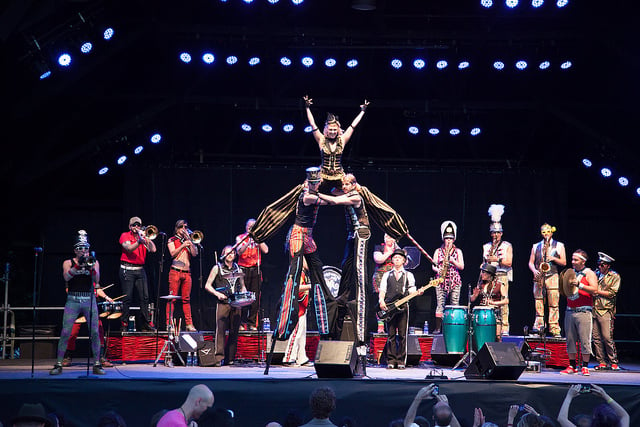 “So, how you do a champagne toast in the biggest theater in downtown Portland, with 3,000 people?”

The response: “No clue, but let’s figure it out!”

For me personally, this year was a little different than in years past.  Steven Pressfield might say, this was our year of Turning Pro.

In the past I’ve been able to watch most of the talks, have long meaningful conversations with friends, and stay out until the wee hours of the morning with out of town visitors.

This year, not so much. While our event has grown over 5x in the last two years, our core team has stayed mostly the same.  That means more moving pieces, more responsibility, and most importantly, a greater sense of ownership when it comes to the show we put on.

That said, I want to share some of the most important lessons I learned this year, that may be a little different than what some other attendees got out of it.

In the Words of Nike, “Just Do It”

Considering WDS is held in Nike’s backyard, this seemed fitting.  For the last year I’ve been making a lot of excuses.  I’ve been living a great life. I’ve done a lot of travel, had a lot of fun, and have grown my business.

What I haven’t done a lot of are the BIG projects.  I’ve had some pretty big plans, but I’ve let myself down by pushing them to the side and failing to commit.

If three years ago Chris took his idea for WDS and said, “oh that would be cool, maybe next year,” thousands of people wouldn’t have had these life changing experiences. No world records would be broken, and no foundations created.

Being a part of WDS this year reminded me to just do it. Failure is a pretty important part of this lifestyle and entrepreneurship in general. And who knows, if I follow through with some of these plans there’s a good chance, they just, might, work.

As You Scale, You Can’t Please Everyone

The more people involved and the more exposure you get, the more opinions will be voiced. – both positive and negative.

This year, I was actually surprised at the lack of negative comments we received.  That said, there are always people who will think it’s gotten too big, or decided it’s not for them.

This is particularly important for me personally. As I’ve grown I’ve found there are people who think the Location Rebel lifestyle isn’t for them.  In a few cases, they don’t think it’s for anyone, or even possible to achieve for that matter.

I used to take this really personally, until I realized, of course it isn’t for everyone. It’s unconventional, and goes against what we’ve been taught for decades.  The more you scale, the more you open yourself up to criticism – and there will always be criticism.

The sooner you recognize this, the easier it gets to take the criticism and use it to make your projects better. Nicky, Tyler, and I doing the presentation for the "Unconventional Race"

We’ve scaled quickly with WDS. I’ve had numerous people ask me, “where are you going from here?”

We talked about this a little bit at our celebratory team dinner the other night, and while I can’t speak about any details, we’ve made it very clear that whatever we do next year we have to challenge ourselves.

Why? Because as soon as you stop challenging yourself, everything goes downhill.

We could put on the exact same conference next year, and people would have a great time.  But that marks the beginning of the end. When you stop surprising people and doing things that make you go “wow”, you move backwards – and that’s the last thing you want.

You know the old saying “Need to get something done? Ask a busy person to do it” – there’s so much truth in that.

While I may have neglected my blogging duties over the last couple weeks, I’ve gotten so much done as we’ve been ramping up for the conference.  When I have too much time on my hands, I start finding ways to waste it.  I get lost on the internet and sit around.

When I have a lot going on, I’m forced to schedule, prioritize, and simply get shit done.

Chris wrote about “Changing the Default” a couple months back – and I think this is really relevant. When you complete a task and you have numerous things that have to get done, it’s easy to change your default action to doing something else on the list.  However, when you’re not as busy and things aren’t as pressing, the default very quickly becomes consumption.

A Quick Thank You

While these lessons are a little bit different than some of the ones I came away with in years past, they will help to shape the way the coming weeks and months play out.

I had such a fantastic experience at WDS and it was because of the incredible team I worked with, the amazing volunteers, but most importantly, every person who was there that made 3,000 people seem like a tiny community.

Another special thank you to everyone came out for my unofficial 4th of July party at the Kennedy School! Initially I was thinking 75-100, but at last count, we figured there was somewhere close to 300 people that showed up – thanks for giving me one afternoon to play and have fun with everyone that came to town.

And for those of you who weren’t at the conference and/or don’t care, we’ll be back to our regularly scheduled content soon with some really actionable how to posts – I know it’s been a little while!

So with that, another World Domination Summit is in the books.  It was incredible, but now it’s time to get back to dominating the world in my way.  Well, at least until meetings for next year ramp up again 🙂